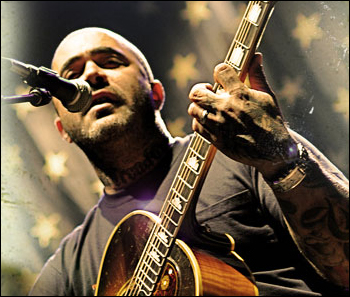 In fact, the Staind frontman never strayed very far from country. It's

However, Lewis fully shows that spirit on his forthcoming five-song Town Line

debut solo release for Nashville-based Stroudavarious Records and, most

prevalently, via its first single, "Country Boy." With a little help from

Lewis tells his story like never before on the song.

Debuting in December 2010, "Country Boy" serves as a fitting introduction to

chorus over a slide guitar, and he opens up about his past, present, and future.

Featuring a fiery fiddle lead from Daniels, a booming verse from Jones and

of the genre's legends, and Chris Young represents the new regime. It's

definitely a personal, autobiographical song, and I'm very thankful that they

Their participation formally announces Lewis's arrival in Nashville with a bang.

The song's music video is an event in and of itself. Not only does the video

feature Jones, Daniels, and Young in the studio, but it also draws from Lewis's

own family archives, giving a glimpse into his youth, home, passions, and so

much more. "The video really is me. This is probably the most I've ever

participated in any video that I've been involved with. I added a lot to the mix

to tell the story."

"Country Boy" is simply the beginning though. As a whole, Town Line signals the

next evolution for Lewis. He went back to his roots, and the results are as

powerful and poignant as anything that he's committed to tape.

Growing up in rural Vermont, the singer/songwriter spent summers with his WWII

veteran grandfather hunting and fishing. During that time, he developed a love

for the land, the woods, and the simple life, which still permeates everything

he does. There was one specific soundtrack to those times though.

"Country was the background music to my childhood," Lewis recalls. "My

of the greats. When Staind did our first tour with Kid Rock in 1999, I rode the

bus with him on a couple occasions and we bonded over this music. I haven't been

able to let go of it since then."

Listeners won't be able to let go of the songs on Town Line either. Lewis

recorded his latest offering in Nashville during early 2010, and it brandishes

the singer's trademark style and a distinct country soul. Produced by Grammy

Award-winning James Stroud and Lewis, this collection proudly sits alongside

Lewis's numerous accolades. With Staind, he crafted the most-played rock song of

the decade, "It's Been Awhile," sold 13 million albums worldwide, had four

consecutive top 3 debuts on the Billboard 200, and released multiple cross-

format radio hits. However, listeners haven't heard him like this until now.

In terms of songwriting, Town Line was an organic progression for Lewis. "The

says. "These songs are country in the sense of classic Americana. They're

simple, understated, and founded on quality songwriting. If you put a country

acoustic, all of them would work as country tunes. When a song comes from an

acoustic, it can go in any direction you want it to go. I always write and play

the same way. The only difference here is the accompaniment."

That accompaniment seamlessly blends with Lewis's unique voice. One song,

"Massachusetts," builds from a poetic visual of Lewis sitting on his front porch

into a love letter for his home state. The song paints a vivid picture of the

tranquility the singer still finds in the Northeast.

"I live in the sticks of Massachusetts," smiles Lewis. "I wrote the song

sitting on the front steps of my house. In the spring, the peepers get so loud

outside. When they come out, they bring on the night. It's chilling and

familiar, and I've heard that sound my whole life. That's how I know I'm home."

Then there's "Vicious Circles." It's a hauntingly beautiful tune that's

simultaneously hypnotic and heartfelt. "It's a little more on the personal side

of things, and it discusses the ups and downs of a relationship," he reveals. "I

started messing around with something during a sound check, and the next thing I

knew, it turned into this song. That tends to happen a lot."

In addition, Lewis re-recorded "Tangled Up in You," the stand-out ballad from

Staind's sixth album, The Illusion of Progress. "Tangled Up in You" immediately

lent itself to country stylings. "The song was already a little bit country in

term of its flavor with the slide guitar and the pedal steel," he says. "We

brought it further down that road."

something very special that goes even deeper than the songs.

He goes on, "A lifetime friendship was formed between James and I while we were

doing these songs. As the head of the label and producer, he possessed an

incredible amount of faith and belief in this project. It just made sense on so

echoes Stroud. "I'd always loved the expressiveness and intensity of Aaron's

voice, but from the very first day in the studio, we hit it off in an entirely

Ultimately, Lewis is giving listeners something that he always does. There's a

tangible honesty to each of these five songs, and he opens up with every guitar

Lewis concludes, "I've always stayed true to how I feel in my songs. I love this

country, and I feel like I've gotten to live the American dream. I'm genuinely

blessed to have this opportunity, and I'm glad to celebrate that classic country

spirit with this new music."

That's why this music will live on forever; just like everything else Aaron