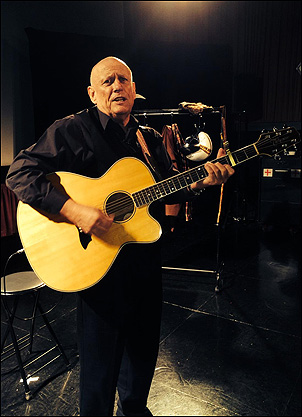 (CelebrityAccess) – Richard Byford has had a dream for many years of writing, producing and performing in his own one man show. He performs stories from his travels, highlighted with original songs, in this heartfelt and sometimes very personal look inside “The Heart of a Gypsy Troubadour”. Emmy Awardwinning actress, Lindsay Wagner, served as production consultant in the development of this long awaited dream.

The show has just ended a 6 week run at the Whitefire theatre in Sherman Oaks, CA and received great reviews.

The show has just been accepted by the United Solo Theatre Festival in New York City and he will perform on Theatre Row in NYC on October 11th at 2pm. Richard has had a career in the entertainment world that has spanned over 50 years.

He started his musical journey in the folk music era of the 60's and honed his craft singing in English & European folk clubs, theatres and pubs. He opened for many of the greats including Tom Paxton, Paul Simon, Sandy Denny, John Denver and Burt Jansch. Richard is a renaissance man for all time – a singer/songwriter with charted records in several countries; a stage actor (graduating from the London Academy of Music & Dramatic Art); part of the international entertainment duo Richard and Mary for over 43 years; a well known public speaker; a special events producer and a radio talk-show host of On The Village Green.

And if that hasnʼt been enough he has also been a prize winning rally car driver and a rodeo bull rider. Born in England and living in California since 1972, Richard has
traveled and performed across America and Canada and throughout Europe, South America, China, Singapore, Hong Kong and Russia. This year one of his original songs “Touched by The hands of an Angel” was a Grammy Contender for Song of the Year and Richard & Maryʼs cd “Keeping The Dream Alive” was a Grammy Contender for Folk Album of the Year!

The Heart of a Gypsy Troubadour
Availability: Call for Availability
http://theheartofagypsytroubadour.com