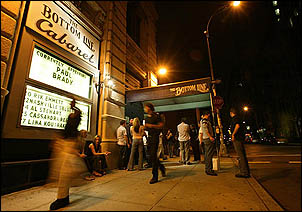 (CelebrityAccess News Service) – AT&T has established a $100,000 sponsorship for programs and events at New York's Bottom Line, the Greenwich Village-based nightclub and host to a who's who list of musical legends. "AT&T's sponsorship is given in the spirit of supporting a cultural icon for music lovers that uniquely represents the vibrancy and diversity of New York," said Kevin Crull, senior vice president, AT&T Consumer.

SIRIUS broadcasts 60 commercial-free music streams as well as 40 news, sports and entertainment streams via satellite directly into cars, homes and offices. In September, SIRIUS underscored its commitment to the music community by pledging major financial support to help The Bottom Line remain in operation.

"AT&T's generous sponsorship is recognition of our intent to survive our current business difficulties, and to thrive in the coming years," said Allan Pepper, co-founder and co-owner of The Bottom Line.

"We're delighted to be associated with AT&T as supporters of The Bottom Line," remarked Mary Pat Ryan, Executive VP Marketing, SIRIUS. "Ever since the inception of our company, SIRIUS has been a committed supporter of music of all genres; we're happy that AT&T shares our passion." –Bob Grossweiner and Jane Cohen