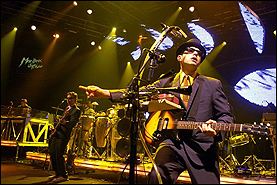 NEW YORK (CelebrityAccess MediaWire) — The Beastie Boys are organizing a tour with selected dates in battleground states to encourage voter participation in the forthcoming elections.

The Beastie Boys won't be going it alone either, joining them in various markets will be Sheryl Crow, Ben Harper, Jack Johnson, Norah Jones, Crosby & Nash, Santogold, Tenacious D, and special guests, as well as representatives from the Rock The Vote, who will be on hand to distribute information on local polling sites, including early voting locations where available.

"This election is too important, too much is at stake to stay at home. We hope that you can come out, have a nice night, dance, sing, get your freak on, and then wake up the next morning and get everyone that you possibly can to get out and vote. If they have early voting in your state then ask people to vote early, lets get everyone we can out there on election day." wrote the band in a statement.

Thus far, three dates have been announced for the tour: