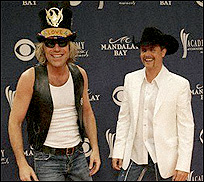 The mayor presented the duo with marshals badges — Deadwood's equivalent of keys to the city — during their concert Sunday at the annual Wild Bill Hickok Days celebration. The concert was taped for an upcoming special to air on Country Music Television in October, tentatively titled "Big & Rich: Alive in Deadwood."

"Kenny and I have been tossed out of half the casinos in Deadwood," John Rich cracked during a telephone interview from Deadwood on Monday. "To get a marshals badge in a town where we raised as much Cain as we have is great."

Big & Rich have written songs about Deadwood and filmed their most recent music video, "Big Time," there. A song called "The 8th of November" from their upcoming album was inspired by a Vietnam veteran "Big" Kenny Alphin met in Deadwood. Alphin also married his wife, Christiev, near there in January.

"There's so much history here, and the Black Hills are one of the prettiest places in this country," Alphin said. "A lot of people that moved into the Wild West had to have some major gumption behind them to take that kind of step. That spirit just lives on in Deadwood."

Rich added, "Our music parallels that. Kenny and me are like the Butch Cassidy and Sundance Kid of country music."

The duo, whose blend of country, rock and rap has sold more than 2 million albums, has spent a lot of time in the historic town and considers it a home away from home.

"It's sort of like our own little town when we come up here," Rich said. "Now that they've deputized me and Kenny it's really like our town now. It's like Luckenbach, Texas, was for Waylon and Willie."