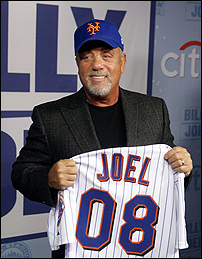 NEW YORK (CelebrityAccess MediaWire) — The Piano Man, Billy Joel, has been tapped to be the final artist to perform at Shea Stadium before it slips quietly into the twilight of history.

The show, dubbed "The Last Play At Shea" will take place on July 16th, presented by Citi, the sponsors of the new stadium which is currently under construction for a 2009 opening. The show will take place after the All Star Game, which marks the mid-point of the professional baseball season.

"Shea Stadium is one of the most hallowed venues in rock & roll history and it's an honor to help throw Shea the ultimate concert farewell party," said Billy Joel. "As a sports fan and a music lover, I will always have a place for Shea Stadium in my heart. I thank the Mets for giving me and my fans a chance to rock Shea Stadium one last time for the ages."

Joel joins an impressive list of iconic artists who've played at Shea, including the Rolling Stones, The Who, The Police, Simon & Garfunkel, Elton John, Eric Clapton, Bruce Springsteen & the E Street Band, Janis Joplin and Jimi Hendrix, who made a little known appearance at Shea for the 1970 Summer Festival for Peace.

Joel will also be the first artist in music history to have played at all four of New York City's major sports venues: Shea Stadium, Yankee Stadium, Giants Stadium and Madison Square Garden, where, in April 2006, he broke the record for longest sequence of sold-out shows by a single artist.

Tickets for the Last Play at Shea will go on sale on Feb 16th at 9:00 AM exclusively on www.507TIXX.com – CelebrityAccess Staff Writers