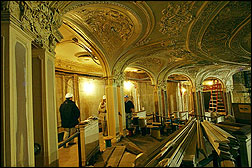 (CelebrityAccess MediaWire) — After more than a decade of neglect and deterioration, Boston's Opera House opened its doors once again on July 16. Boston's Mayor, Thomas M. Menino was joined by David Anderson, president of Theatre Management, Clear Channel Entertainment and Tony McLean, president of Broadway in Boston/Clear Channel Entertainment for the ribbon-cutting ceremony to officially reopen The Opera House, which opened in 1928.

After completion of a lengthy $38 million restoration, this "palace for the people" reopened with the inaugural performance of Disney's The Lion King. The Opera House restoration represents a major milestone for Broadway in Boston/Clear Channel Entertainment as well as the Boston Redevelopment Authority, whose plans to revitalize the downtown Ladder District are truly coming to fruition.

The Lion King was the first live production at The Opera House since December 1990. Designed in 1928 by preeminent architect Thomas White Lamb, The Opera House was constructed as a memorial to B.F. Keith, the "father of vaudeville," by his business partner Edward Franklin Albee (grandfather of playwright Edward Albee). Designed in the ornate Beaux Arts style, with Baroque and Renaissance elements, the 2,600 seat theater opened as a vaudeville house, but by 1929, had converted to a movie house. Refurbished and renamed the Savoy in the 1960's, the theater continued to operate as a movie house until 1978 when The Opera Company of Boston acquired the theater for their artistic home, keeping the theater lit until 1990. Left derelict for more then a decade, the theater's lavish decorations began to decay; the ceiling plaster began raining down on the seats, with water damage destroying ornate frescoes and tapestries.

On November 12, 2002, Mayor Menino presented Clear Channel Entertainment with a building permit to formally begin the restoration of the long dormant theater. For the past two years, a crew of over 150 workers has restored the entire theater, overseen by David Anderson and architect Gary Martinez of Martinez &Johnson / Architecture. Work on the 2,600 seat venue included 30,000 hours devoted to restoring plasterwork alone, refurbishment of 352 original light fixtures, and the expansion of the stage in order to accommodate modern, large-scale productions. Original wall fabrics, carpets and glazes were re-created and murals were painstakingly cleaned and restored. Throughout the process, the primary challenge was to honor Lamb's original design, while augmenting the theater with state-of-the-art technology systems that would allow it to meet the demands of a modern performing arts complex.

Listed on the 1995, National Trust for Historic Preservation's "11 Most Endangered Historic Places," the completion of The Opera House represents Clear Channel Entertainment's second involvement in the restoration of a landmark theater in 2004, following the February reopening of the Hippodrome Theatre at the France-Merrick Performing Arts Center in Baltimore. As part of Clear Channel Entertainment's continued effort to restore and preserve historic theaters nationwide, they are currently exploring opportunities to rescue other endangered theaters around the country.

After Disney's The Lion King ends its run at The Opera House, the theater will host the return engagement of Andrew Lloyd Webber's The Phantom of the Opera beginning in March 2005. A newly formed relationship between Broadway in Boston/Clear Channel Entertainment and the Boston Ballet will bring The Nutcracker to The Opera House beginning in 2005. A mix of old world opulence and modern day technology, The Opera House will host a broad range of local, regional and national programming. –Bob Grossweiner and Jane Cohen