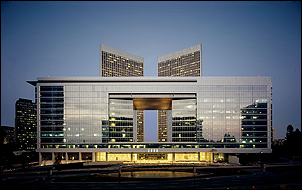 CENTURY CITY, CA (CelebrityAccess MediaWire) — The Creative Artists Agency has officially made the move to its new Century City digs. The move has been anticipated for some time, but it finally took place over the weekend, finalizing on Tuesday, January 16th. Agents were assigned offices and provided with a limited selection of office furniture to choose from.

The new 12 floor building, which reportedly cost $350 million, was designed by the architectural firm Gensler with Gene Watanbe as the principal designer.

The facility has two separate office towers, two grand lobbies, each over 300 feet across. One is accessible from the street, the other from an interior garden space. In addition to CAA, the building will also house an investment firm, an entertainment law firm Barnes Morris Klein Yorn, a bank and a film production company. A number of dining establishments will also try to find a place in the building, including A Habanero Grill, Deli Boys, Coffee Bean & Tea Leaf and Tom Colicchio's steak house.

The company's new information is as follows:

The new fax number will be announced shortly. — by CelebrityAccess Staff Writers