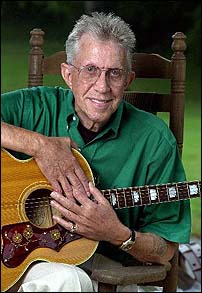 Bill Carlisle and Porter Wagoner are the newest members of the Country Music Hall of Fame.
A surprise announcement was made by the Dixie Chicks during
their Grand Ole Opry appearance. Formal induction for the two
new members will take place during "The 36th Annual CMA
Awards on November 6.

Wagoner is being inducted in the annual "Open" Category, while
Carlisle is to be inducted in the special "Performer Whose
Career Achieved National Prominence Prior To 1980" Category.
All inductees are chosen by the Hall of Fame panel of
electors, consisting of more than 300 anonymous voters
appointed by the CMA Board of Directors.

Bill Carlisle, a Kentucky native born in 1908, established one
of Country Music's most enduring careers; first as a solo
artist with songs such as "Rattlesnake Daddy;" then, as a
popular duo with brother, Cliff (who was also a successful
solo performer). The Carlisle Brothers' best-known song as a
duo was "Rainbow At Midnight. After amicably parting ways
with his brother, Carlisle formed a new group (The Carlisles)
in the early 1950s, which released hit songs including
"Too Old To Cut The Mustard," "Is Zat You, Myrtle?" and
others. Soon after joining the Grand Ole Opry in 1953,
Carlisle earned his familiar nickname "Jumpin' Bill" in
reference to his jumps and leaps while performing on stage.