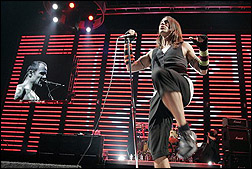 NEW ZEALAND (CelebrityAccess MediaWire) — The Red Hot Chili Peppers showed a little love for one of their fans. Korean born Sang Je Lee, who had been living in Whangarei, New Zealand was struck and killed by a motorist while camping in a parking lot to get tickets for the Chili Peppers.

This weekend, his parents flew into NZ from South Korea and attended the concert in their son's memory with a number of his friends.

The band hooked them up with VIP passes and tickets, met with the group of family and friends.

"We got to sit in this area near the front, there were lines on the ground showing where it was. We got VIP passes to wear around our necks." Sang Je's friend Caleb Thomson told New Zealand newspaper, The Northern Advocate.

The band's largess didn't end there. During the concert, they played the musical intro to a song request "We asked if they could play a song for Sang Je, the Zephyr Song (past Chili Peppers hit), and they said they'd try but they hadn't been practicing that one for the show." Caleb said. – CelebrityAccess Staff Writers