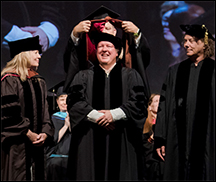 PROVIDENCE, RI (CelebrityAccess MediaWire) — College the place where your mind multiplied, where you met strangers who would become your best friends, where you would write a song that would change pop music forever… well, in one case, at least. 44 years ago, Chris Frantz, Tina Weymouth, and David Byrne closed the door to a painting studio they shared at the Rhode Island School of Design (RISD) and emerged with the song Psycho Killer. Two years later, they would become Talking Heads. This last Saturday, Tina Weymouth and Chris Frantz (who later started the Tom Tom Club), alongside ex- Talking Head Jerry Harrison and influential film maker John Waters (among others), accepted an honorary PhD from the place where it all began.

Psycho Killer was originally written for The Artistics, a band Frantz and Byrne founded in 1973. Weymouth (who was dating Frantz at the time the band formed) describes them as “a prototypical, all-guy punk band—very geeky and horribly loud.” It wasn’t until two years later that the friends moved down to New York City, Weymouth hopped on stage, and they called themselves Talking Heads. In 1977, the same year that Frantz and Weymouth got married, Talking Heads released their first album which was immediately a breakthrough. Talking Heads went on to tour the world, record 10 albums, and work with Jonathan Demme on ‘Stop Making Sense,’ one of the most lauded concert films of all time.

Chris and Tina kept their musical flame alive when they formed the band Tom Tom Club. Their first single, Wordy Rappinghood, found a mainstream audience with its uncanny fusion of schoolyard rap over a funky beat.


Hear a live version from their Genius of Live compilation, released in 2010: https://youtube.com/watch


Their second single, Genius of Love, flew to #1 on the charts and led the duo to their first gold record. The song has been remixed, covered, and sampled by artists like Grandmaster Flash, Mariah Carey, Tupac Shakhur, and more. Being featured everywhere from Soul Train to Rolling Stone, the project has imprinted Frantz and Weymouth further into music history.

In 2002, they were inducted into the Rock and Roll Hall of Fame.

In 2012, Tom Tom Club released Downtown Rockers, their first album after a 12-year break. The title track pays tribute to the many bands that created the downtown music scene in New York City in the 70's. The album received accolades for being a genuine and lively return to the scene. Frantz and Weymouth continue to dig their toes into musical collaborations, continuing recording and working with musicians on a global level.


And now the rock stars are PhDs. –by CelebrityAccess Staff Writers