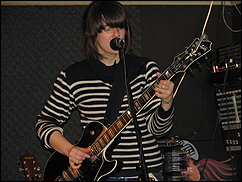 GUELPH, Ontario (CelebrityAcces MediaWire) — City officials in Guelph, Ontario, have put the kibosh on the only place in town where you could see a rock concert and purchase a used mattress at the same time.

The Family Thrift Store has been putting on small concerts for four years, showcasing at least 30 bands amongst the store’s clutter, which is shifted around to accommodate performers and make space for up to 60 people.

The Guelph Mercury reports that a recent feature article on the unique space drew the attention of the city clerk’s office, who lodged a complaint with the city’s fire prevention services over “some concerns about public safety.”

Ray Mitchell, who has owned the store for 15 years, told the paper he’s willing to make changes to be in line with the fire code, but he doesn’t understand why the fuss has come about now.

“There’s never any danger to public safety,” said Mitchell. “If we happen to have a fire, there’s two doors in sight.”

The store’s electrical system and exits will need to be assessed, in a plan that will help convert the change in occupancy from a store to a small concert venue. Emergency lights will have to be installed over the exits, and open flames and sparklers will be prohibited.

“We’re not big fans of open flames,” joked Mitchell. “Some of that underwear is kind of flammable.” –by CelebrityAccess Staff Writers