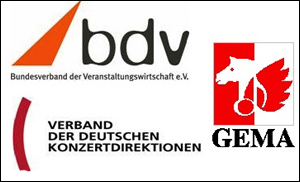 BERLIN, Germany (VIP NEWS) — The negotiations by the German Federal Association of Concert Organizers (bdv) and the Association of German Concert Agencies (VDKD) with GEMA, on the continuation of their rate agreement in the field of concerts with entertainment music have failed.


Consequently GEMA has just issued a new rate, which will enter into force on 1 January 2015. In place of the previous share, graded according to numbers attending, authors are in general now to have a share of 10 per cent in the gross event turnover, irrespective of the event size. The increase is to
occur in annual phases from 2016 on and reach its target in 2020. bdv and VDKD have rejected the increase demand of the Performing Rights Society.


The associations will institute arbitration proceedings at the German Patent and Trade Mark Office (DPMA) in Munich and lodge an application for the issue of an agreement proposal. It was possible to arrive at a transitional arrangement with GEMA in the form of continued application of the current rate.


This was rejected by the association representatives with reference to the special cultural importance of this event category. “Especially in the case of such smaller events, the cost
burden in relation to the achievable turnover is in any case much higher than at larger events,” explained VDKD President Michael Russ. “Those primarily affected in the event of a rate increase in this category would above all be young artists, who want to win a market share in the first place.” The discounts introduced for new talent and cultural events did not reduce this problem either.


The association representatives jointly declared, “We regret that no agreement was reached with GEMA and emphasis our appreciation of the artistic achievement and important
participation of components and text authors at concerts. However, after GEMA already drastically increased the rates under the overall agreement of 2010 and the final stage of this
increase only took effect this year, neither the organizers nor audiences can be convinced that there should once again be cost increases.” The demands of GEMA thus had to be rejected as unacceptable. “They lack economic balance and will have direct and disproportional effects on the cost structures of the concerts, and as a result inescapably also on the admission prices,” according to Russ. “It is in accordance with the legal position that a rate once agreed inherently includes an assumption of appropriateness,” Michow noted. “The associations already appealed to the DPMA during the last overall rate negotiations in December 2008.


After an arbitral award and renewed negotiations, both sides were able to agree in December 2009 on an overall agreement with a term up to the end of 2014. What was regarded on both sides a few years ago as appropriate cannot already be inappropriate again,” according to the lawyer.

More than 500 agencies, tour and concert organizers are united in the two professional associations of the German live entertainment sector. They generated a turnover of about
3.8 billion euros in 2013 with the sale of over 120 million tickets.