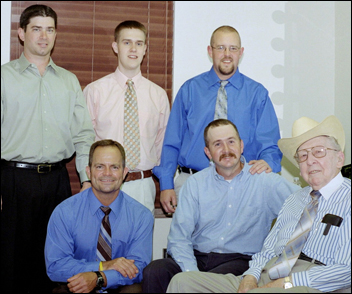 SALISBURY, NC (CelebrityAccess MediaWire) — Bluegrass legend Curly Seckler began his musical career in 1935, over WSTP radio in Salisbury, NC. He went on to perform with a number of the top names in bluegrass music, including Charlie Monroe, Jim & Jesse, Mac Wiseman, The Stanley Brothers, and The Sauceman Brothers. In 1949 he joined Lester Flatt & Earl Scruggs' Foggy Mountain Boys, and remained with them for nearly a dozen years, recording over 130 songs with them. His distinctive, razor-sharp tenor harmonies grace many of their classic hits, setting the standard for countless bluegrass singers who have followed. Curly joined Lester Flatt's Nashville Grass in 1973, and then took over leadership of the band after Flatt passed away in 1979. Seckler led the Nashville Grass for another fifteen years before retiring from full-time touring in 1994. In 2004 he was inducted into the International Bluegrass Music Association's Hall of Fame. Seckler continued to perform and record, and his 2005 release, "Down in Caroline," was a finalist for IBMA Recorded Event of the Year. His most recent recording, "Bluegrass, Don't You Know," was picked among the Top 10 CDs of 2006 by the Chicago Tribune.

On December 25, 2009, Seckler celebrated his 90th birthday, however he has no plans to slow down! This year marks Curly Seckler's 75th Anniversary in music! He kicks off the celebration with these two upcoming shows.

Presented by WSVS 800 AM and Lunenburg County Public Schools. This concert is made possible by the 21st Century Community Learning Centers Grant.

Constant Change
The members of Constant Change grew up immersed in the fertile North Carolina bluegrass scene, students of its traditions. Clifton Preddy has been playing fiddle since he was three years old, inspired by his great-uncle, who was a well-known old-time fiddler. Brian and Daniel Aldridge are the sons of mandolinist/singer Mike Aldridge, who has played with some of the most popular bands in the state, including A.L. Wood & the Smokey Ridge Boys, the Bass Mountain Boys, and Al Batten & Bluegrass Reunion. As a youngster, guitarist Dan Wells learned to sing in a mountain church house, just as most of the first generation bluegrass masters did. Gary Baird has been playing bass with bands in the Roxboro area for 20 years. Last year Constant Change released its fourth CD, "Hills of Home."

In May of 2009 Constant Change was selected to perform with Curly Seckler on the PBS TV show, Song of the Mountains (to be broadcast in the spring of 2010). Seckler was amazed that such a youthful band would be so well versed in his music. For the members of Constant Change, it was a dream come true to perform with their musical hero.

Dudley Connell
Dudley Connell was a founding member of one of the most exciting traditional bands of the 1980s and early '90s, the Johnson Mountain Boys,. He burst upon the bluegrass scene, wowing audiences with his amazing vocal range, heartfelt singing style, powerful songwriting, and rock solid rhythm guitar playing. In 1995 Dudley joined The Seldom Scene, with whom he still performs. In 2000 he was named IBMA Male Vocalist of the Year.

When Curly Seckler made a collection of new recordings in 2004, Dudley was one of the first singers he approached to join him. They recorded five songs together, and these concerts will showcase their fabulous harmonies for the first time ever on stage! –by CelebrityAccess Staff Writers