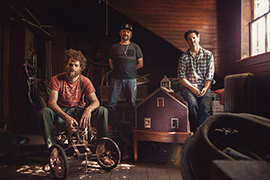 BURLINGTON, VT (CelebrityAccess) — Jam band legends Dispatch announced that they will again hit the road in this summer for an extensive tour of North America.

The tour, in support of Dispatch’s latest album “America, Location 12” will feature support from Nahko and Medicine for the People for most dates.

The first, brief segment of the run kicks off at the Gerald R. Ford Amphitheatre in Vail, Colorado on June 16, followed by a show at Red Rocks the next day and then they are on to Salt Lake City on June 19th.

Then, after a short pause, the tour resumes on July 13th, at the Green At Shelburne Museum in Burlington, Vermont with dates slated through the rest of the summer until the band’s scheduled Sept. 21st show at Blue Hills Bank Pavilion in Boston.

Nestled among the other dates of the tour are some unique items, including their performance in Bangor, Maine on July 14th with Rebelution and Stephen Marley. As well, the band will be performing several two-night stands with different sets, including at NYC’s Central Park Summerstage on July 18th and 19th, and two nights at Stubb’s in Austin, Texas, on August 11th and 12th.

“Much like last summer, we’ll be hitting up a bunch of new cities on this tour. We’ll be playing some new songs that we haven’t tried live, as well as some songs that we recorded, but didn’t go on America, Location 12. We played some of them in Europe in 2016 and they’ll be making their way back into the fold. Bringing back some old tunes too that haven’t seen the light in a while,” Dispatch wrote in their tour announcement.