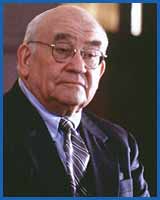 Ed Asner has been chosen by the Screen Actors Guild for its most prestigious honor, the Lifetime Achievement Award for career achievement and humanitarian accomplishment. The seven-time Emmy winning actor with notable leads in "Lou Grant" and "The Mary Tyler Moore Show" will receive the honor at the 8th Annual Screen Actors Guild Awards on March 10.

"Ed Asner's prolific and much-honored acting career demonstrates a consummate ability to transcend the line between comedy and drama," said SAG President William Daniels. "His passion for social and political causes has been consistently underscored by deeds as well as words. His service and commitment to the rights of the working performer is unparalleled."

Asner served as SAG president two consecutive terms from 1981-85. In 2000, SAG honored him with its Ralph Morgan Award, presented from time to time "for distinguished service to the Guild's Hollywood membership."