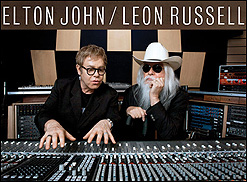 NEW YORK (CelebrityAccess MediaWire) — Sir Elton John has teamed up with Leon Russell to release a new collaborative album, dubbed 'The Union', which is set to drop on Decca Records on October 19th in the U.S. The first single, "If It Wasn't For Bad," was available on iTunes and other digital music retailers starting on August 24th.

Produced by Oscar and multiple-Grammy winning producer T Bone Burnett, The Union was recorded live in the studio with Elton and Leon on dueling pianos and marks the first time the two artists have worked together since 1970. The 14-track album covers a variety of musical genres from R&B, soul, gospel, country, pop and rock written by Elton, his longtime lyricist Bernie Taupin, Leon Russell and T. Bone.

Leon first met Elton in 1970 when he attended Elton's first ever U.S. show at the Troubadour in Los Angeles and the two artists soon after went on a tour, including a date at the Fillmore East in New York.

"In the late '60s and early '70s, the one piano player and vocalist who influenced me more than anybody else was Leon Russell," Elton said. "He was my idol."

After years of being out of touch, Elton listened to Leon's music while on safari in Africa last summer and was inspired to reconnect with his idol. "Elton called to ask if I would do a duet album with him," Russell said. "I'm very happy that he chose me to do this."

In addition to the album, Sir Elton and Russell are hitting the road for a handful of dates to support the album's release.

Dates for the mini tour