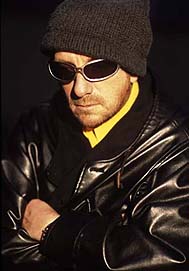 Elvis Costello will receive the American Society of Composers, Authors and Publishers (ASCAP) Founders Award on May 20 at the Beverly Hilton Hotel in Beverly Hills, CA, as part of the 20th annual celebration of ASCAP's Pop Music Awards on Tuesday. The award is given to pioneering songwriters who have made exceptional contributions to music.

Among some of Costello's most memorable songs are: "Allison," "Watching the Detectives," "Less Than Zero, "Pump It Up," "Radio Radio," "Everyday I Write the Book," "The Only Flame In Town," "Almost Blue," "Veronica," "Deep Dark Truthful Mirror," "God Give Me Strength", among many others.

"Elvis Costello is a defining voice in pop music, both as a singer and songwriter," said Marilyn Bergman, ASCAP president and Chairman of the Board. "His work is consistently marked by a level of intelligence, passion and integrity that places him in the top ranks of musical artists of our time. We are very proud to honor him with the ASCAP Founders Award."