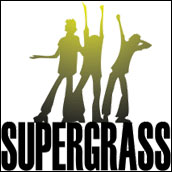 BOSTON (AP) — Go ahead and sing to the members of Supergrass when you recognize them on the street. Just make sure it's not the same old song.

Ten years after their music hit the British pop charts, the band members tell The Boston Sunday Globe that they can't get around in public without being serenaded by fans. The trouble is the song picked is always "Alright," a paean to hedonistic youth.

"It doesn't feel like it's been 10 years since we started playing together – anything you really enjoy doing tends to go by really fast," said band member Rob Coombes.

"What does seem like a long time ago is when we look back to when we wrote some of the early stuff and the mind-set we were in – songs that are a bit difficult to play nowadays because they're such young songs, not necessarily musically, but lyrically. But it's been such a good laugh that time has just flown."

The band's latest album is "Supergrass Is 10: The Best of 94-04," a 21-track overview that surveys the career of one of England's most commercially successful rock bands.

To celebrate their decade, Supergrass is embarking on a six-city U.S. tour.

"I wouldn't be surprised if a lot of people didn't realize it was a compilation," said Coombes. "Hopefully, this will be an ideal album for showing people what we're about."