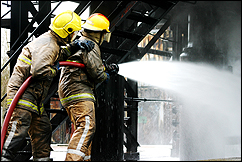 (CelebrityAccess MediaWire) — Jitterbugs nightclub in Nacogdoches, Texas, was destroyed by a fire early Sunday morning, that was discovered by passing motorists at about 7:30 a.m.

Reports of white and black smoke coming from the 1,700-capacity large metal building were called in from miles away, but investigators have yet to determine the cause of the fire.

“There was heavy smoke when the first engine arrived on the scene,” Nacogdoches Fire Department Captain Terry Westmoreland told the Daily Sentinel. “We made an attempt at an interior attack, but once two crews went inside, we saw that the fire had already advanced, and we couldn’t put enough water on it. We had to pull out and make a defensive attack and fight it from the outside.

“It just had too much of a head start on us,” he said.

Club owners Robert Y’Barbo and Bubba Y’Barbo described Saturday night as “a slow night,” and said they had no idea what might have caused the blaze.

“One of the biggest problems with nightclub fires is trash cans,” Robert told the paper, meaning that patrons often toss cigarettes into trash cans. “We’re really careful about that. We throw out the trash every night.”

The Y’Barbos were at a loss for words when asked if they planned to rebuild.

“We’ll see,” Robert said. “Just about every major act in the country has played here. A lot of performers played here before they hit it big.”

Jitterbugs opened in 1993 and employed about 25 people. The club had two shows scheduled, Jason Boland & The Stragglers for May 4th, and Doug Stone for July 22nd.

Westmoreland told the paper that the Y’Barbos had always been careful at the club, and said routine inspections were made at the owners’ request.

“The state fire marshal regulates codes in the county,” he said. “But once a month, we inspect all clubs and high-occupancy restaurants in the city, and at Robert’s request, and as a courtesy to him, we would stop out here.

“With a place this size, and with as many people as this building could hold, they did a good job,” Westmoreland continued. “Robert kept the business right in line (regarding fire safety).” –by CelebrityAccess Staff Writers