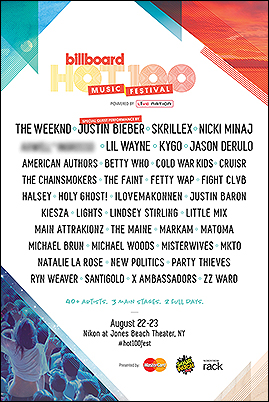 NEW YORK (CelebrityAccess Mediawire) — The Weeknd, Skrillex, Nicki Minaj and Lil Wayne will headline the first-ever Billboard Hot 100 Music Festival that will also feature a performance by Justin Bieber. The festival, produced by Billboard in partnership with Live Nation will bring together chart-topping artists on August 22 and 23 at New York's Nikon at Jones Beach Theater and surrounding beach areas for a weekend of music performances. More than 40 of today's hitmakers, including Kygo, Jason Derulo, American Authors, Betty Who, The Chainsmokers, Cold War Kids, Fetty Wap, Halsey, Holy Ghost!, Kiesza, Little Mix, Santigold and ZZ Ward, along with newer artists will perform on one of the festival's three stages throughout the weekend.


Collectively, the festival headliners have 197 entries on the Billboard Hot 100 chart, and have sold a combined 116.3 million albums and songs in the U.S., according to Nielsen Music. They also represent some of this generation's biggest social media influencers, with fan following across Twitter, Facebook and other platforms. Joining them will be dozens of Billboard-charting artists spanning multiple genres, from pop and rock to R&B and dance. Festival goers will see artists at one of the festival's three stages, including the famed amphitheater Nikon at Jones Beach Theater, as well as two additional stages with one located on the beach.


"It's an honor to be able to extend the Billboard brand into the festival space, and we feel that Jones Beach is the perfect location to create something truly unique and unforgettable," said Billboard co-president John Amato.


"The Hot 100 Music Festival will be one of those truly memorable summer concert events. We are very excited to bring fans some of summer 2015's chart toppers in a venue that will showcase the best these artists have to offer," said Live Nation President and CEO, Michael Rapino.