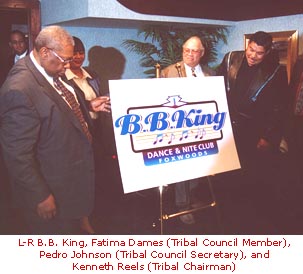 The Foxwoods Resort Casino in Mashantucket, Connecticut and BB King will open the BB King Dance & Nite Club, featuring adjoining entertainment venues, that will offer dancing in the larger of the two rooms and a smaller jazz, blues and comedy venue. B.B. King himself will open the clubs with performances on Jan. 11 and 12. The licensing agreement between King and Foxwoods is independent of King's three other namesake clubs (Memphis, Los Angeles and New York).

"It's a logical pairing of the world's best casino and the top blues artist on the planet," said Tom Cantone, vice president of entertainment at Foxwoods. "We already offer the most headliner entertainment of any casino in the U.S., and these two clubs will double the number of our existing clubs for the benefit of those who visit Foxwoods to club hop and take in the very best entertainment." The agreement precludes King from performing at any other casinos in the Northeast.

B.B. King will play several times a year, jamming with up-and-coming talent as well as participate in special events at the casino. The union marks the first time the casino has made a joint venture with an outside party and insiders say it was the brainchild of Tom Cantone. Cantone tells CelebrityAccess "We've never gone outside for a joint venture. I made an offer to B.B. King and his manager Floyd Lieberman in the dressing room when he played the club."

The Dance Club, the larger of the two, will feature an art-deco motif and a theater-style entrance marquee. With a centerpiece 700 sq. ft. stage, the room will also have two bars, a d.j. booth and a dance floor. It will accommodate 429 patrons.

The Nite Club portion of the complex is half the size of the Dance Club and will provide for 245 patrons. It will sport a converted warehouse design motif with a fiber-optic illuminated glass block along with a granite and copper bar. B.B. King memorabilia and a custom portrait will also greet fans.