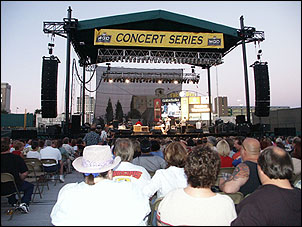 The multi-purpose Grizzlies Stadium was transformed over the weekend in a matter of hours from a gem of a baseball park into the newest outdoor concert amphitheater in California.

On Friday, September 20, the amphitheater opened to great crowds for the B.B. King Blues Festival and by Saturday morning it was hosting 8,200 pre-school children for Barney’s only west coast appearance this year.

Equal distance between Los Angeles and San Francisco, entertainers are realizing what John and Diane Carbray have known for years – the Central Valley is an underserved entertainment market. As the only multipurpose stadium in California’s San Joaquin Valley, the new Grizzlies Stadium has become a catalyst for Fresno’s downtown revitalization and a welcomed entertainment venue to the entire region of over a 1.5 million residents.

John Carbray, President and CEO of the Fresno Grizzlies, told CelebrityAccess “We began our concert season with a crowd of over 6,100 – 80 percent capacity, for the second leg of B.B. King Blues Festival’s west coast tour and we look forward to bringing many more concerts to the region over the next few months.”

After the B.B. King Blues Festival on Friday night, Grizzlies Stadium hosted over 8,000 pre-school aged children and their parents for a visit from Barney. The stadium, with accents in Grizzlies purple and its brand new mobile stage, was the perfect location for the purple dinosaur’s first of only five appearances throughout the United States this year.

Diane Carbray, Chief Operating Officer, told CelebrityAccess that “With the addition of the largest moving stage in the world designed by award winning Brown United we can accommodate acts of any size in a matter of hours.”

Supported on 126 rubber wheels, the 40 tons of wood and steel is the creative brainchild of Grizzlies owners John and Diane Carbray and concert stage designers Mike and John Brown of Brown United in Southern California. The 40-foot by 60-foot stage is “the largest mobile stage in the world,” said John Brown, CEO of Brown United. “At this size, it can pretty much handle any act out there.” The gigantic stage and towering roof was designed to be rolled onto the field at Grizzlies Stadium, converting it from a ballpark into a first-class entertainment amphitheater.