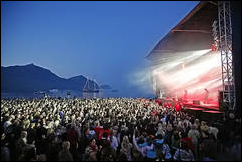 FAROE ISLANDS (VIP) — One of the leading festivals on the Faroe Islands has gone bankrupt. G! festival has been held in the town of Gøta on the Faroe Islands since 2002 and during it’s time grew to be an international festival with an attendance of up to 8.000 people with international headliners over the years such as Natasha Bedingfield, Guillemots (UK), The Holmes Brothers, The Dixie, Hummingbirds (US), Infernal, Outlandish, Nephew (DK), Europe, Loney Dear (SE), Kaizers Orchestra, Serena Maneesh (NO), Darude, Bomfunk MC's (FI), Mugison, Pétur Ben (IS) and local Faroese heroes Teitur, Eivör, Boys in a Band, 200 and Budam

This years festival was a financial disaster, leaving the festival with a debt of aprox. 350.000 Euro and forcing the company behind the festival, G! Music, into bankruptcy. VIP-Booking asked Jon Tyril, manager and owner of the festival, why the festival went into bankrupty “Simply because we did not control our expenses well enough and we did not earn as much from food, drinks and merchandise sales as we had expected. We did meet the expectations on ticket sales, but because of too high expenses and low income other than tickets the debt became too much for the company that has arranged the festival for two years now”.

However Jon Tyril seems confident when asked if the festival will be reinstated in the future “Yes definately! The G! Festival is one of the most important cultural events in the country and the idea and concept of the festival is by far much larger than the company that went banckrupt. We have been amazed to see the reactions when the news broke of the financial situation and the amount of goodwill that we have in the community that became visible – even amongst our creditors – so we have had so many hands stretched out to help re-instate the festival that we are truly amazed and thankful. At the moment we are talking to investors and other stakeholders with an interest in the project putting together a new reality. Hopefully within 4 weeks we have a fully operational formal reality.

The other leading festival on the Faroe Islands is the Summar Festival (www.summarfestivalur.fo) in Klaksvik. 10.000 people attended the festival in 2007 that was headlined by rock band the Scorpions making it the biggest music event on the Faroe Islands ever. Although the festival had some problems with the weather this year, it is strong financially and will be held again next year on August 7-10.