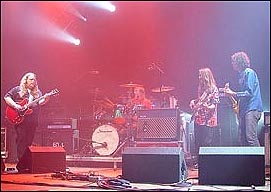 "We've been fortunate to have many amazing bass players tour and record with us," says Haynes. "When we played with Andy Hess, it felt like a band."

“It's a real honor and privilege to play with Gov’t Mule,” says Hess. “Allen’s are some big shoes to fill, but I am going to try to put my own stamp on it. I am very excited about being a part the band.”

Hess has played and recorded with Gov’t Mule countless times over the past three years. He previously performed with The Black Crowes, Joan Osborne, Freedy Johnston, and most recently toured with The John Scofield Band. Between gigs he’s done session work for the likes of David Byrne and Tina Turner. "Now I am joining one of the greatest rock bands in the world," says Hess, "and we have a great future ahead of us.”

ATO Records will release Gov’t Mule’s latest offering "The Deepest End" on Tuesday, October 7. The bundled DVD and two CD package will include 32 songs from the May 3, 2003, Saenger Theatre concert as well as behind-the-scenes footage and interviews with Gov't Mule and special guests.

To celebrate the release and the announcement of Hess’s new permanent status, Gov’t Mule will perform on “Late Night with Conan O’Brien” on October 8. They’ll follow up with another stint on the road dubbed "Rebirth of the Mule Tour" with special guests Chris Robinson & New Earth Mud.

–By Bob Grossweiner and Jane Cohen