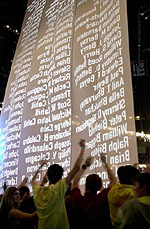 NEW ORLEANS (AP) — U2 had the Super Bowl halftime stage all to itself, and the Irish rockers delivered a moving tribute to America and the victims of the September 11 terrorist attacks.

Lead singer Bono walked onto the field with a slow, shoulder-wagging swagger, singing the group's recent hit, "Beautiful Day," as he climbed onto the point of a pink, heart-shaped catwalk that surrounded the stage.

As the first song wound down, a giant screen scrolled the names of victims in the attacks, and the group broke into the 1980s hit, "Where the Streets Have No Name."

The names also reflected in overlapping patterns across the stands, which were dark, save for the countless camera flashes.

Unlike glitzy halftime shows of the past, the effects were limited to standard strobe lights. But all attention was on Bono anyway, who pulled back his lapel to reveal an American flag to the roars of the crowd.

Carey, wearing a long, royal blue dress, performed the national anthem for the first time, her renowned high inflection peppering several verses. As she sang with the stadium lights down, fans in the Superdome's three levels held red, white and blue glow sticks, respectively, from top to bottom. A giant American flag in the shape of the United States was unfurled on the field.

Producers said most of the musical performers prerecorded their sound tracks to reduce the possibility of technical problems. However, U2, played live.

McCartney, who was in New York when the hijacked planes struck the World Trade Center, sang his Sept. 11-inspired song, "Freedom."

He took the stage, acoustic guitar in hand, as cheerleaders with silver, glittering pompoms spelled out "freedom" across the field. Others marched with dozens of flags from foreign nations.

"I'm proud to be here and stand up with America," McCartney said in a TV interview shortly before halftime ended.

As the group sang, servicemen marched around the perimeter of the field with American flags while women wearing red, white or blue statue-of-liberty outfits marched in front of the stage, forming the ribbon that has stood as a symbol of national unity since the attacks.

The song concluded with a young boy in a camouflage military uniform ringing a replica of the Liberty Bell.

Anthony and Blige then sang "America the Beautiful," accompanied by the Pops and flanked by flag-bearing law officers.