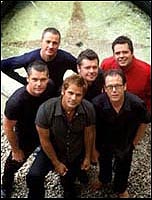 INXS will return to the United States to perform their first shows in more than five years, the first since the death of lead singer Michael Hutchence. Kirk Pengilly (guitar, saxophone), Garry Beers (bass), Tim Farriss (guitar), Andrew Farriss (keyboard, guitar), Jon Farriss (drums) and featured vocalist Jon Stevens will kick off a 40-city tour May 30 in Anaheim, CA. The set list will encompass such INXS classics as “Need You Tonight,” “Devil Inside” and “New Sensation”–songs that are emblematic of the group’s hard-hitting funkified rock.

“Much of our career has been spent in America and Canada and it’ll be great to be back playing there again,” said Kirk Pengilly.

After the November 1997 death of Hutchence, INXS understandably took time off to consider their future–and if there would be one without Michael. Coming off 23 years of solid touring, the break also offered an opportunity for the group’s members to pursue individual projects (writing, producing and performing).

However, the group’s love of live performance drew INXS back to the stage and the invitation to officially open Sydney’s Olympic Stadium in June 1999 was the catalyst. Rather than replace Michael, the idea of performing with various guest vocalists was more appealing, and Terence Trent D’Arby took the role for the Olympic Stadium concert.

“It’s no secret that we have always loved playing live. That’s what we did for 23 years and we definitely missed being on stage,” Tim said.

Then in May 2000, the group’s close friend Jon Stevens–the former frontman with one of Australia’s most popular bands, Noiseworks–took on guest vocals for INXS’ first full concert since October 1997. The feedback from both critics and fans was extraordinary and over the past year Stevens teamed with INXS for several major concert events, including a 13-date tour of Northern Australia. The success of that trek along with shows in Vienna fueled the desire for further touring, and in August, INXS returned to Europe for five additional shows.

Band member Andrew Farriss said: “No-one will ever replace Michael as the lead singer of INXS. At the same time, we all still have a passion to perform and to continue doing what we love. In the past year we’ve played some shows with Jon, who is a fantastic singer. It has felt very comfortable, and sounded pretty damn good, so it seems a natural progression to perform together for this U.S. tour.”