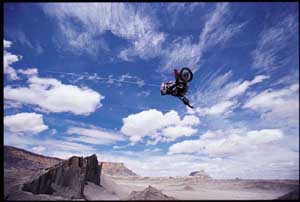 JamSports, a division of Chicago-based Jam Productions, has been selected by AMA Pro Racing as its new promoter partner for the AMA US Supercross Championship Series, ousting current promoter Clear Channel Entertainment whose contract expires at the end of the 2002 season. JamSports' contract begins with the 2003 season and runs through 2009.

The decision was made by the Board of Directors of AMA Pro Racing after evaluating proposals from several companies, including Clear Channel.

"We'd like to thank Clear Channel Entertainment for its significant contributions to AMA Supercross over the past several years," said Scott Hollingsworth, chief executive officer of AMA Pro Racing. "The board felt this was the appropriate time to take a long, hard look at our expectations for the future of AMA Supercross and, in particular, the type of relationship we should develop with our business partners. Several proposals were considered, but JamSport's stood out, as did the quality of executive firepower they were prepared to commit to the future of the sport."

Jerry Mickelson, a principal of JamSports, said, "We are delighted to have this opportunity to work with the AMA and AMA Pro Racing and appreciate the trust they have shown us by placing part of their 75 years of racing history in our hands. Our objectives are to deliver powerful and successful live events along with great television coverage — the platform for turning AMA Supercross riders into household names. We expect to provide the manufacturers and sponsors value for their investment beyond their highest expectations."

Music manager Tony Dimitriades, also a principal in JamSports, whose area covers Brand Development; New Technologies and E-Commerce; Merchandising and Entertainment Industry Liaison added, "We are convinced that the growth of Supercross is best accomplished by strengthening even further the relationship among all participants, by respecting the differing points of view and recognizing the contribution of each."

AMA Pro Racing is the leading sanctioning body for professional motorcycle sport in the United States.