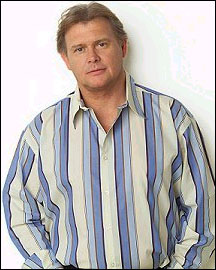 (CelebrityAccess News Service) – John Farnham, one of Australia's most loved and successful entertainers is to be inducted into the ARIA Hall of Fame at the 17th Annual Aria Music Awards on Tuesday October 21.

This year's inductee burst onto the scene in 1967 and quickly became an Australian music icon. Since then, he has continually proved himself as one of the most successful artists this country has ever seen. Denis Handlin, chairman of ARIA said, "This year's Hall of Fame recipient, John Farnham, is an artist who has reached the pinnacle of musical accomplishment in this country. This acknowledgement is a testament to the staggering success he has achieved throughout his career. On behalf of the ARIA Board I'd like to congratulate John and his manager Glenn Wheatley on this much deserved honour."

A figurehead of the Australian music scene, John Farnham has experienced an unprecedented level of local support and recognition which has paved the way for the progression of pop music in Australia. His stellar career began more than 30 years ago in the swinging sixties when he was crowned the golden boy of Australian pop for the hit single, "Sadie the Cleaning Lady,"

In 1986 he released the groundbreaking Whispering Jack, an album that achieved platinum sales status in just four weeks. The single You're the Voice stayed at No. 1 for seven weeks, while the album debuted at No. 1 and remained in that position for 25 weeks, a feat which has never been matched by another artist in Australia. The following year he went on to sweep the ARIA Awards with a total of six awards, including Best Single, Best Album, Best Male Artist and Highest Selling Single and Album. At the end of 1989, the Australian Music Report confirmed that Whispering Jack, with more than 3.2 million copies sold worldwide, was the top selling Australian album of the decade. It remains the biggest selling Australian album of all time, reaching 17 times platinum status in Australia alone.

Amongst his subsequent albums, seven have achieved multi-platinum status: Age of Reason, Chain Reaction, Full House, Romeo's Heart, Anthology, The Main Event, 33 1/3. With each album released, Farnham inevitably undertook a national tour and smashed ticket sales records where ever he went. Farnham is the only artist in Australian music history to have achieved the #1 album chart position across five consecutive decades.

In addition, Farnham has continued to support a number of charitable causes with performances for, among others, Rwandan refugees, Farm Aid, Community Aid Abroad, and the Starlight Foundation for children with terminal illnesses as well as for the INTERFET troops stationed in East Timor. In 1996 his work for charity and his international musical ambassadorship were recognised with the honour of the Order of Australia.

October 2002 saw Farnham release his eagerly anticipated new album titled The Last Time, which debuted at #2 and hit the #1 position in late November 2002. It then went on to attain triple Platinum status in less than three months, as well as earn the distinction of being the highest selling Australian album released in 2002.

In 2002-2003 Farnham completed his 95 date farewell tour which took him across the country, playing to approximately 430 000 people Australia wide. Not only was this the biggest tour in Australian history, the tour was so successful that he became the world's seventh most profitable touring act, putting him in the company of Cher and Bruce Springsteen. The DVD from the final concert of 'The Last Time' has now gone triple platinum and is now officially the biggest selling DVD by an Australian artist.

Managing director of BMG, Ed St John said, "John Farnham has been this country's most popular performer for 35 incredible years. For the past 16 years, he's been signed to BMG and he's always been the biggest act on our label. We are so proud of John's achievements and we're honoured to be associated with this remarkable Australian. We value our close personal relationship with John and his manager Glenn Wheatley and we look forward to working with them for many years to come. The Hall of Fame induction comes at an interesting time in John's career: he's hotter than ever!"