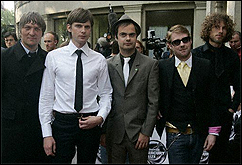 The Chiefs laid down a two hour set that included some material off of their forthcoming album 'Off With Their Heads' and with some additional support rendered up by The Hair and the Red Light Company, NME reported.

Live Nation partners Academy Music has been on the grow, announcing the purchase of the Leeds property for £4,500,000 last year and launched two similar venues in Sheffield and Oxford. They also own and operate numerous other venues around the UK, including the Brixton Academy in London.