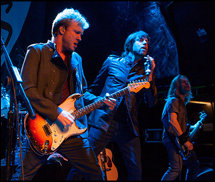 LONDON (CelebrityAccess) — Blues rock guitarist Kenny Wayne Shepherd is planning a brief tour of the UK in early 2015, including a major headline concert at the London Shepherd’s Bush Empire on Wednesday 15th April.

Joining Shepherd on the tour will be long-time vocalist Noah Hunt, plus drummer Chris Layton, a 2014 inductee into the Musicians Hall of Fame as a member of Stevie Ray Vaughan and Double Trouble, ex-Firm bassist Tony Franklin and keyboardist Riley Osbourn (the latter is the former keyboardist for Willie Nelson).