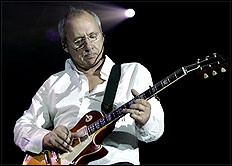 Mark Knopfler will tour the United States in support of his most recent CD, "Shangri-La" (Warner Bros.), recorded at Shangri-La, a '60s vintage studio in Malibu. For the first time in his career, concert tickets will be available through Mark Knopfler's web site, www.mknews.net. The goal is to provide fans with early access to a limited number of good seats at lower prices. In addition, in six cities one free "Shangri-La" CD will accompany the purchase of each pair of tickets.

"Shangri-La" is currently available in a deluxe edition that includes both the CD and a DVD featuring behind-the-scenes interviews and performances of four songs including the previously unreleased track, "Summer Of Love."

The North American summer tour features many of the same musicians with whom he has worked since 1996: Richard Bennett (guitar), Guy Fletcher and Matt Rollings (organ and piano), Glenn Worf (bass) and Chad Cromwell (drums).

William Topley will appear as special guest on part of the tour, opening for Knopfler starting on July 19. Knopfler plays guitar on the title track to Topley's debut Warner Bros. CD "Sea Fever," scheduled for release on June 21st. Topley was leader of the British group The Blessing with whom he recorded two '90s albums. He later released four solo CDs in the U.S., earning a dedicated following for his distinguished voice and unique musical style that combines influences ranging from Cuban and reggae to soul and country.


*each pair of VIP tickets purchased will receive one CD

**each pair of tickets purchased will receive one CD