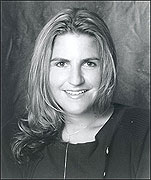 (CelebrityAccess MediaWire) — Lisette Rioux has been named vice president, Marketing and Artist Development for Artemis Records, based at the company's headquarters in New York. She will report to Artemis CEO/President Daniel Glass.

"Lisette brings to Artemis not only a wealth of experience in the fields of both marketing and artist development, but an energetic and creative vision for our artists," said Glass. "Her strong relationships with the touring community will prove to be invaluable for the Artemis roster". Rioux was most recently director, Artist Development for the Island Def Jam Music Group for the past four years.

Rioux began her career as a band promotion and production manager for The Muse in Nantucket, MA in 1995. In 1996, she joined the staff of Autonomous Records in Atlanta, GA as director of Retail Promotion. In 1997, Rioux was named director of Publicity for Autonomous/Roadrunner Records. From 1998-2001, Rioux held the position of director, Artist Development for the Sire Records Group/London-Sire Records. –Bob Grossweiner and Jane Cohen

"We are proud that Yolanda is joining our executive team," said Tom O'Malley, executive vice president, UMVD.
As an industry veteran she has played critical roles in launching and building
media businesses. We will benefit greatly from her long history of successfully sourcing acquisitions in the entertainment industry."

Before joining UMVD, Macias was vice president, DIRECTV PARA TODOS and International Services for DIRECTV, Inc. There, she oversaw all aspects of the DIRECTV Spanish-language programming service as well as international and ethnic programming developments for the DIRECTV service. — Jane Cohen and Bob Grossweiner

(CelebrityAccess MediaWire) — Michelle Madison has been appointed vice president, Urban Promotion for Universal Motown. "Michelle brings with her tremendous experience and a keen insight into the always changing promotion arena," stated Michael Horton, senior vice resident of Promotion for Universal Motown. "The entire staff joins me in welcoming Michelle in her new role."

"I've worked with Michelle for many years and know her to be a dedicated executive," said Sylvia Rhone, president of Motown and executive vice president of Universal. "She is not only at the top of the promotion game, but instinctively understands the bigger view of how to break an artist, approaching every challenge with unwavering tenacity and determination. Her expertise, as well as her enthusiasm, make her an invaluable asset to the entire company."

Most recently Madison was vice Pesident, R&B Promotion at the Elektra Entertainment Group, Warner Music Group Company. She was named R&R Urban Executive of the Year in 1998 and 1999. In 2002, she won the Impact Award for Excellence.

(CelebrityAccess MediaWire) — Hip Hop Since 1978 (HHS78), the production and management home to Kanye West and production house for boardsmith Just Blaze, has extended its label deal with Atlantic Records. At the same time, HHS78 principals G. Roberson and Kyambo "Hip Hop" Joshua have been upped to senior vice presidents of Urban A&R, overseeing A&R responsibilities for various Atlantic artists, including those signed through their Hip Hop Since 1978 imprint.

G. and Hip Hop were involved in the daily operations of Roc-A-Fella Records since the label's inception in the early '90s. Having originally signed West to their production company in 1998, and negotiating his signing to Roc-A-Fella, Hip Hop Since 1978's first official project was West's album, "The College Dropout." –Jane Cohen and Bob Grossweiner