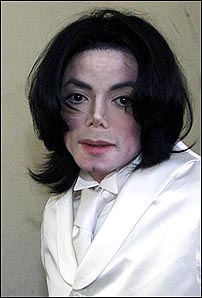 LOS ANGELES (AP) — Michael Jackson, the King of Pop who amassed a half-billion-dollar fortune over the past 20 years, is saddled with debt and teetering near bankruptcy, his former financial advisers say in a lawsuit.

The lawsuit, set for trial June 18, claims Jackson's extravagant spending has created "a ticking financial time bomb waiting to explode at any moment."

Brian Oxman, a Jackson family attorney, said he does not believe the 44-year-old singer is near bankruptcy.

"I see no signs of this impending disaster," Oxman said. "I cannot say it for 100 percent sure because nobody knows his financial statements. But I can say it for a reasonable certainty."

Oxman also said that Union Finance has been paid for its work.

The lawsuit was filed in April 2002 by Union Finance, described as one of South Korea's leading financial advisory firms. Jackson hired Union Finance in 1998 to help straighten out his finances, according to the lawsuit.

"When they were retained, plaintiffs believed that Jackson was incredibly wealthy," the lawsuit states. "At the time plaintiffs agreed to work for Jackson, there was no clue that Jackson's extravagant lifestyle had all but bankrupted him."

The firm said it soon discovered that Jackson had only two months' worth of available funds.

Union Finance's lawyer said that he stands by the allegations in the year-old lawsuit and that he took Jackson's deposition last week in Beverly Hills.

"For whatever reason, Michael Jackson is not paying his debts," said Pierce O'Donnell, a leading entertainment finance lawyer. "He has little or no means of income. He lives off a line of credit."

He added: "The day of reckoning is near."

Forbes magazine last year estimated that Jackson was earning $50 million a year at the height of his popularity in the 1980s and '90s and had amassed $500 million over his career. Forbes estimated Jackson has $200 million in debts but a net worth of $350 million.

Jackson's 1982 album "Thriller," which has sold 26 million copies, is second behind the Eagles' first greatest hits album in all-time sales in the United States. But sales of recent Jackson albums have sagged.

Jackson's assets include his Neverland ranch in the hills above Santa Barbara and homes in Southern California and Las Vegas. Most of Jackson's assets are in musical holdings worth an estimated $450 million, including 200 Beatles titles and songs recorded by Elvis Presley, Forbes reported.

Union Finance said it helped Jackson obtain $200 million in loans through Bank of America between 1998 and 2000. In his deposition last week, Jackson said he didn't know how much he owed on the loans, O'Donnell said.

PORTLAND, Maine (AP) — A federal judge plans to rule next week on the proposed settlement of a music antitrust lawsuit that would put roughly $12.60 in the pockets of 3.5 million consumers.

Judge D. Brock Hornby heard testimony for more than three hours Thursday on the fairness of the agreement that calls for music distributors and retailers to pay $143 million in cash and compact disks.

Terms of the settlement call for checks to be mailed to 3.5 million people who filed claims under the class-action lawsuit. The actual amount depends on how much money goes to lawyers and distribution fees.

The payout would culminate an antitrust suit that was started by prosecutors in several states in 1996.

The lawsuit, signed by the attorneys general of 43 states and territories and consolidated in Portland in October 2000, accused major record labels and large music retailers facing competition from discount retailers like Target and Wal-Mart of conspiring to set minimum music prices.

Of the total settlement amount, $75.7 million would be distributed in the form of 5.6 million music CDs sent to libraries and schools throughout the nation.

The proposed cash settlement in the case totals $67.3 million.The actual cash distributed to the public is expected to be around $44 million. Payments should be mailed out within weeks of the settlement's approval. The remaining cash will be eaten up by distribution costs and attorney fees.

Roughly 3.5 million U.S. residents who purchased music between 1995 and 2000 registered for claims in the price-fixing suit against major record labels and large music retailers.

PHILADELPHIA (AP) — A federal judge dismissed a copyright infringement lawsuit against Britney Spears, saying two Philadelphia songwriters failed to prove the pop singer copied the melody of one of their songs.

U.S. District Judge Berle M. Schiller ruled last week that Michael Cottrill and Lawrence Wnukowski couldn't provide enough evidence to prove Spears had access to their song titled, "What You See Is What You Get," when she recorded, "What U See (Is What U Get)."

Cottrill and Wnukowski said they gave one of Spears' representatives a copyrighted version of their tune in late 1999 after being asked to submit songs for consideration for the singer's upcoming album.

But Schiller, citing defense testimony, said the melody of Spears' song was completed by the beginning of November 1999, before Spears and her representatives "would have had access to a copyrighted version of plaintiffs' song." He also said there weren't enough similarities between the two songs to prove copyright infringement.

The four men credited with writing Spears' song, released on her best-selling second album, "Oops! … I Did it Again," testified that they hadn't heard Cottrill and Wnukowski's tune until two months ago.

"As plaintiffs have not come forward with any affirmative evidence showing access, there is no reasonable possibility that the creators copied plaintiffs' song before November 1999 when the melody of defendants' song was completed," Schiller wrote in his decision.