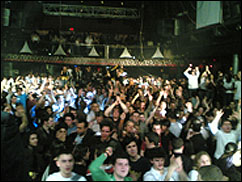 BOSTON (CelebrityAccess MediaWire) — Boston nightclub impresario Patrick Lyons will close his 1,920 capacity Avalon and his 750 capacity Axis clubs Oct. 1 to make way for a 35,000 square-foot, state-of-the-art live music facility that comes with a price tag of about $14 million, reports the Boston Herald.

“It will bring a whole new vitality to the area,” said Lyons’ spokesman George Regan, adding the new venue “won’t be appealing to the Lawrence Welk crowd.”

Lyons has a new vision for Lansdowne Street which includes replacing two of Boston's most famous nightclubs with a modern entertainment complex that would include restaurants, sidewalk seating, and a terrace looking toward Fenway Park.

Taking inspiration from Wrigleyville, the friendly entertainment district associated with Chicago's Wrigley Field, Lyons said he wants to turn Avalon and Axis into a cutting-edge facility that would enhance Lansdowne Street and complement the area's main attraction, Fenway Park.

"Our last significant renovation was 12 years ago," said Lyons. "Our dream is changing the climate from all the intensity of nightclubs to more diversity — restaurants, dining, and dancing."

Lyons said he will spend about $14 million to build a 2,500-capacity club with a larger stage, better lighting, more amenities — such as dressing rooms and showers for the artists — and a sound system "as good as we've had" or better.

Located in a popular but dingy area dominated by the ballpark, the buildings have a long, storied history. One was built as a horse barn over a century ago and used by Boston Globe founder Eben Jordan, who also owned the Jordan Marsh department store. Later used as warehouses, the buildings have been music clubs since the late 1960s, with names including the Boston Tea Party, 15 Lansdowne, Boston Boston, Metro, and Citi.

Artists including Bob Dylan, Van Morrison, and Carly Simon have played there, and more recently Taylor Hicks and Fall Out Boy. Elvis Costello is lined up for May 15.

Lyons commissioned architects Cambridge Seven Associates Inc. to create a modern venue on the site, next to his two other clubs, The Modern and Embassy, which would also undergo renovation.

Lyons spoke in his cluttered office above the clubs, stuffed with memorabilia that includes a 1970s J. Geils "Showtime" album poster, a 1995 photo of Lyons with Aerosmith's Steve Tyler, and an advertisement for what he said was Boston's first AIDS benefit, in 1984.

Lyons came to the district in 1977 when Avalon was 15 Lansdowne, and now he owns or co-owns that and several other Boston clubs and restaurants, including Kings bowling lanes and Jasper White's Summer Shack in the Back Bay, and Lucky's Lounge in the Fort Point Channel area.

He has been concentrating recently on opening entertainment complexes in other locations, including Atlantic City and Mohegan Sun, the Connecticut venue that features gambling.

But he is moving now on Lansdowne Street because the Red Sox have made a firm commitment to stay at Fenway Park and the city of Boston has encouraged local property owners to clean up the area. About two years ago the city and landlords put thousands of dollars into widening the sidewalks to 12 feet, planting trees, and installing antique-style streetlights.

"All the owners said, 'Let's change the makeup of the street,' " said Lyons.”These clubs — they're part of the fabric of the town."

Lyons said the changes are being made in part because live entertainment has become increasingly important at clubs since about 1980 and because 2,500 seats is an optimum number for many groups. His two clubs, Avalon and Axis, hold about 2,100 and 1,100 respectively, but can't currently be combined.

The new club would also be able to accommodate smaller concerts and would have more VIP or "opera box" seating, in addition to standing room.