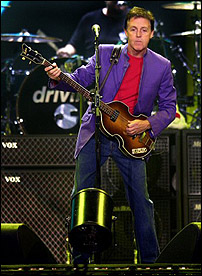 Sir Paul McCartney is to play a homecoming gig in Liverpool to round off his world tour.

The star has kicked off his world tour in Paris, where he played a collection of new songs and classic Beatles tracks.

The Back in the World tour will end at the 40,000-seater open-air venue of Kings Dock in Liverpool on 1 June.

Announcing the new date, Sir Paul said: "I can't do a world tour without bringing it home."

The last time Sir Paul played his home town of Liverpool was a one-off gig in 1999 at the city's Cavern Club, the spiritual home of the Beatles.

He began his tour in Paris, in the city's Palais Ominsports in front of 15,000 fans.

During the three-hour shows – due to arrive in the UK on 5 April – Sir Paul is playing the greatest hits from his 40-year back catalogue.

The tour will net millions of pounds for the 60-year-old singer who is already the world's wealthiest music artist with an estimated £620m fortune.

He launched into Beatles song All My Loving with the words: "Bon soir Paris – we have come to rock you tonight."

Other Beatles favourites included Yesterday, We Can Work It Out and I Saw Her Standing There.

He tried out his French on the 15,000-strong crowd
Sir Paul paid tribute to his songwriting partner John Lennon with the song Here Today, which he wrote after Lennon was shot dead in 1980.

Announcing the song, he said: "Sometimes you don't say what you mean to say to people in life.

"Sometimes you miss the opportunity, sometimes it's too late and you regret it."

As the song finished, the crowd chanted: "All we are saying is give peace a chance" – a reference to Lennon's anti-war song.

Sir Paul listened to them before paying a further tribute to fellow former Beatle George Harrison, who died of cancer 16 months ago.

To rapturous applause he performed a version of Harrison's Beatles song Something.

Sir Paul draped himself in the French tricolour for the encore – and was met with a standing ovation.