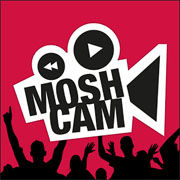 LOS ANGELES (Hypebot) – Moshcam launched in 2007 featuring live shows of international and local acts performing in Sydney. Since then they've expanded their film activity to other major cities and in January launched a YouTube channel. That channel is now in the top 3% of music channels globally with over 40k fans and 3 million views a month. This week they launched a new website for their high quality concert videos with plans for a fully accessible mobile site in addition to the mobile apps for their YouTube channel.

Moshcam's new site has a nice design and is easy to drop into for HD video viewing of live concert videos. For example, you can check out this Public Enemy track from a concert in Sydney, skip to other videos via the concert tracklist and browse related content from the site.

I did encounter some problems "connecting to server" that delayed the video starting and paused it periodically. Hopefully that's a temporary glitch.

For the moment the YouTube channel is outpacing the website with 3 million monthly views vs. Moshcam.com's 2.1 million page impressions. Moshcaam also has channels on other platforms including Google TV and Hulu.

The official announcement of recent changes and landmarks includes the promise of a "fully accessible mobile site in November, allowing users to enjoy video whenever they want on whatever device they choose."

I'm guessing that means they're making the site responsive or adaptive for mobile devices since that's currently not the case.

Overall it sounds like creating and promoting their YouTube channel has been a great success for Moshcam. With their web and mobile developments hopefully they'll be able to bring some of that traffic back unless, of course, the play is to become a bigger part of YouTube.

You can check the site for the "addition of internationally-renowned Rudimental filmed at The Enmore Theatre in Sydney, Tom Odell at Irving Plaza in New York, Karnivool at Luna Park in Sydney, Daughter at the Metro Theatre and a captivating backstage video series with controversial punk queen Amanda Palmer."