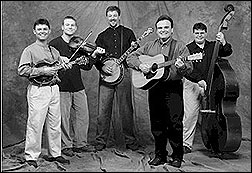 NASHVILLE, TN (CelebrityAccess MediaWire) — Turbo-charged bluegrass group Mountain Heart narrowly avoided a major bus accident while en route from their performance at the FastGrass Bluegrass Festival in Concord, NC, to Nashville for their showcase performance during the Americana Music Conference.

As the band drove along Highway 74 in the wee hours of the morning on September 24, the canister containing the air for the bus’s air brake system was ruptured. This rendered the brakes useless, as the bus careened onto an exit ramp at 60 mph. The group’s bus driver, an experienced former truck driver, managed to bring the bus to a safe stop. In less capable hands, the bus likely would have overturned. The group spent the rest of the night and early morning hours making repairs so they could arrive in Nashville on time for their performance during the Americana Music Conference.