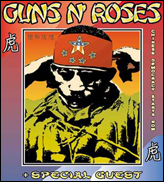 BEVERLY HILLS, CA (Hypebot) –
"Chinese Democracy", the new album from Guns N’ Roses, will premier worldwide exclusively today through MySpace Music. Beginning today, fans can stream Chinese Democracy in its entirety on the band’s MySpace Music profile three days before the street date. The exclusive marks one of the biggest premieres for the company, with all MySpace territories participating.

Chinese Democracy will be the first original recording from Guns N' Roses since the 1991. The band has sold an estimated 100 million albums worldwide, 42 million in the United States alone. Since joining MySpace in 2005, Guns N’ Roses has made more than 400,000 friends through their MySpace Music profile.