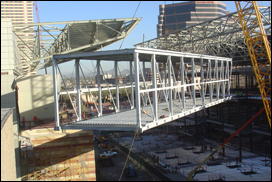 PHOENIX (CelebrityAccess MediaWire) — Though it didn’t generate as much media hoopla as the London Bridge’s relocation to Lake Havasu, a new bridge was installed in downtown Phoenix that spans the ever-narrowing gap between the city’s meeting-and-conventions industry and a brighter future.

The bridge physically fuses the Phoenix Convention Center’s newest additions: the already-open West Building and the soon-to-be-completed North Building. Its installation is a major milestone in a $600 million expansion project that will make the convention center one of the 20 largest facilities of its kind in the nation.

The bridge – which is 150 feet long and weighs 82½ tons – was hauled through the streets of downtown Phoenix in the early-morning hours of Jan. 22, then hoisted into place 54 feet above Third Street. The steel structure eventually will be encased in glass, providing its users with views of Phoenix’s urban landscape and the ridgeline of nearby South Mountain.

More importantly, the bridge will provide passage between the uppermost levels of West and North buildings. In the West Building, which opened in the summer of 2006, that level includes a 46,000-square-foot ballroom; in the North Building, which is on schedule to be complete in December, the top level will house 190,000 square feet of virtually column-free exhibition space, unique outdoor meeting areas and loading docks with air-conditioned bays.

The North Building, which is three times the size of the West Building, occupies an entire city block. When complete, it will feature amenities such as a street-level ballroom, 56 meeting rooms, and a food court with five themed eateries and outdoor seating.

The sky bridge will be just one of the crossings between the neighboring buildings. In addition to pedestrian crossing on the street level, convention-goers will be able to flow from one building to the other via a shared underground exhibition hall the size of six football fields. This sub street gallery will feature 32-foot ceilings and floors scored in 10-by-10-foot squares for easy booth setup.

“As a convention delegate, you will be able to explore the exhibits of your event in the 312,500-square-foot exhibit hall and not know that you have crossed the street from one building to the other,” said Tracey Short, the Phoenix Convention Center’s Assistant Director.

When it welcomes its first meeting groups in January 2009, the fully expanded Phoenix Convention Center will feature nearly 900,000 square feet of exhibition and meeting space, three ballrooms with cutting-edge audio and video technology, $3.2 million worth of public art, and ecologically friendly features like solar paneling and a water-harvesting garden. The convention center also will be a major stop on the METRO Light Rail line, which will link downtown to Phoenix Sky Harbor International Airport and the neighboring cities of Tempe and Mesa.