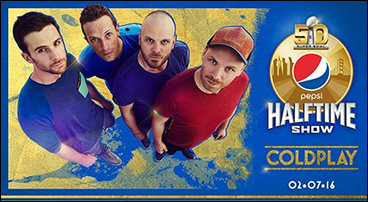 And the winner of the night?


HONDA! For offering free Uber rides home, at least in SoCal, where I was watching.


You make the most of an opportunity. The advertisements were so busy being clever that they missed their target. You want to make us believe in your product and want to use and buy it. But in an era where fame is everything and substance goes out the window it's no surprise that Madison Avenue demonstrated cluelessness.


But the truth is our nation is in a mass upheaval. That's the essence of both Trump and Sanders. We want the truth, authenticity and credibility, we want to be respected, and when you see only dollar signs we shrug and move on.


Sometimes you have to say no. All exposure isn't good exposure. What was the chance casual Coldplay fans would be infected by the band's performance and purchase tickets to their show? Close to nil.


Now the band has a stink upon it, relegated to second tier status in their own supposedly shining moment, they appeared to be smiling nitwits in a sea of humanity that resembled nothing so much as Up With People, the lame, safe, halftime show the NFL used to employ, when musicians abhorred the rules and regulations of sports, when they were all about rejecting cultural norms as opposed to embracing them for profit.


It's a violent sport. What's up with all the wimpy music?


Lady Gaga stretched out the national anthem to the degree there was barely time for football. She's gotten a publicity pass she does not deserve, her last album was a stiff and her trek with Tony Bennett a sideshow. It's a hits business, and she hasn't had one in eons and probably will never have one again, why is she considered a national treasure?


Because the NFL and CBS don't have their ear to the street. They don't know there's a generation gap. They just believe everyone will buy the crap they serve them. As if nobody under thirty wants to cut the cord, as if football deserves a spot in America's heart along with apple pie and religion. Did you see the MVPs walk out at the beginning of the game? Terry Bradshaw could barely amble out. How could Goodell let this happen? How come everybody in the 1% has lost touch and perspective, not knowing their success depends on the little guy, who is arching his eyebrows and judging what they're seeing?


Chris Martin looked like a dork. And although the video stage was cool, he and his band's music never lit up the joint. And the diversions looked like something from the June Taylor Dancers, but Jackie Gleason would want nothing to do with them. You could barely hear the vocals and you had the nincompoop teens running out to swarm the stage, even though they were barely conscious the last time the band had a hit. It was a celebration the audience was left out of. You could do nothing but sit there and wonder why anybody cared.


Until Bruno Mars took the stage.


Beyonce came from the gym. She was working so hard that when she aligned with Chris and Bruno in the finale she was nearly exhausted. She too missed the message, 2016 isn't about reveling in your excellence, adoring you from afar, but embracing you when you get down in the pit with us, your audience. I'm not in that good a shape and most Americans aren't either. Watching Bey was like watching an Olympian, you could respect her, but you just could nor warm up to her.


Never mind the chutzpah of doing her new song. I give her credit for that actually, most of the audience was unfamiliar with most of Coldplay's material so what difference will it make? Did it help her sell tickets?


Not for Coldplay either.


You see we're inundated with marketing messages. And we choose what to pull in, what to embrace. We have no problem watching entertainment and then discarding it nearly instantly. I mean who at home is sitting there saying…I didn't know Beyonce was going on the road, let me fire up my credit card and drop $100+ a ticket. No, the decision to go is much more considered these days. Sure, it's hard to get the message out, but it's not hard to say no if you're a customer.


So why is it so hard for a manager to say no?


Come on, you see witless actors whoring themselves out, everybody from Anthony Hopkins to Christopher Walken to Helen Mirren. But they're chameleons, filling roles. We don't believe in their personalities, we don't even really know who they are!


But musicians touch our souls. They're consistent. They stand for something.


But the only thing Chris Martin and company stood for is promotion. And we know hype when we see it.


It was a strange game, dominated by defense. It may have been Peyton's last, but one wonders if Brock Osweiler could have done just as well. Still, it was riveting to see Cam Newton, the biggest star on the gridiron according to the industrial hype machine, be completely hamstrung. Not so much by any individual, but a team, the Denver defense.


After losing the Super Bowl two years ago, Elway retooled. Threw out what didn't work. He didn't put new paint on an old edifice, he got a clean piece of paper and started over. Kudos to him, it worked!


We need a clean piece of paper in music. We need musicians who have some self-respect, who think they're bigger than the game, who are willing to turn down promotional opportunities because they make them look small, like Coldplay.


But the NFL knows nothing about music. It wants something entertaining, but not edgy. But in music, that's death. Then again, we've got so much of that on today's scene. It's almost like the string-pullers don't want to champion anything outside the box, they want it safe.


But the world is dangerous.


Music used to reflect this.


The only peril on the field today was to the players.


No, that's not true. By refusing to turn down this promotional opportunity they revealed the band to be the sham that it is. Four blokes who should have stayed in college who appeal to white people afraid of edge.


Sid Vicious is rolling in his grave.


Remember, you win in music when you're outside, when you play by your own rules, when you behave like the rock star you are, not a tool of the man.


It wasn't quite Billy Squier territory, but Coldplay's career was stopped in its tracks today. Now fans will be subjected to hatred for their choice. We all saw the show and said HUH?