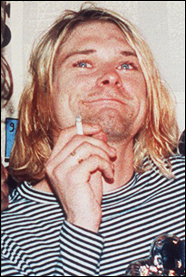 ‘You know what, Jimmy? Fuck you. Take that beat and shove it up Timbaland’s ass.’

You don’t talk to Jimmy Iovine that way!

What kind of crazy, fucked up world do we live in where the pop stars are the goody-goodies, the ass-kissers who made our eyes roll in high school as they obeyed all the rules and respected their elders. It’s like Eddie Haskell has come back to haunt us! You don’t want to piss off the big bad record company, your career will be ruined!

I’ve met some of the rock stars of yore, and they’re not like you and me. They don’t believe in rules. And they don’t take orders. They do it their way. With contempt for society, the norm, what everybody says they should do.

I mean if you’re working all day on the assembly line, do you really want to go see someone who tells you to never miss a day at the plant and to never talk back to your boss? Is this the release you desire?

Or you’ve got Lady GaGa, who thinks rock and roll is a fashion show. When done right, it doesn’t matter what you wear on stage, Stefani Joanne Angelina Germanotta. The music speaks for you.

But the music hasn’t come first, we haven’t had a rule-breaker since Kurt Cobain. Sure, Kurt had a way with a melody, but the reason he became an icon and still is was his refusal to play it any way but his own. To call out posers. To have no tolerance for b.s. Hey GaGa! Why don’t you check out the sweater Kurt wore on MTV "Unplugged"! With enough talent, you can dress like a nerd!

Kurt complained of being abused in school. Of getting no respect. He was everything we wanted to be. Honest. And rich.

Now the focus is only on rich. Used to be you used your talent to get to the bucks. Now, talent is a diversion, the machine will provide that for you. We’ve got songwriters and producers, stylists, we can turn you into someone…just like everyone else. A two-dimensional character made for the brain dead medium known as terrestrial radio. Once upon a time we respected radio, lived to listen. Imagine that!

Used to be you told the label head which way the wind blew. Didn’t allow any input into your music. Hell, does the exec know how to play? And, if you fucked with the President enough, he might blackball you and harm your career, but those days are through. Now you can be completely independent, not beholden to anyone. Free to sell your CD at Target. Huh?

Explain it to me all day Eddie Vedder, but I just see it as expedient. Sure, you’re allowing the indie stores to play, but this has got nothing to do with the future, not even the present, but the past. Fans want the music instantly, online, now. Trent Reznor gives it away and you tie in with a retailer that focuses on fashion?

We respect outlaws. Not faux characters in scripts, like Sacha Baron Cohen sitting on Eminem’s lap at the MTV Movie Awards. And if you’re watching the VMAs for anything but shits and giggles, if you think that show has anything to do with music, you don’t know how hard you’ve got to kiss the butt of the MTV team to get on. What a marketing opportunity! Who can resist the exposure!

Trent called out Chris Cornell on Twitter, for his atrocious record with Timbaland.

If Peter Frampton can kill his career overnight, with one record made for the theoretical masses, doesn’t that prove anybody can do it? Hell, while we’re at it, blame the stylist for Billy Squier. Heroic rocker, blue collar king, dresses in pink and is never heard from again.

It’s truly a new era. The government might tell us to meet the new boss, same as the old boss, that Goldman Sachs can still rule, but do we have to continue to respect all the entertainment wankers who think they’re more talented than the creators they oversee?

Music used to be the foremost exponent of creativity. Because it was the cheapest to make and the easiest to distribute. But now music is moribund, even less hip than TV, singles are massaged, marketing campaigns are designed like a World War III invasion… We’ve only got one chance, we can’t blow it! How about putting out great music, that sells itself, for a long time? Believe me, an artist puts out something good and word will get out on the Internet, the same way everyone learned that Lenny Kravitz’s last opuses were crap and he’s been forced to tour "Let Love Rule" in clubs on the album’s twentieth anniversary to pay his bills.

Do we really have to fear Jimmy Iovine? Doug Morris? Lyor Cohen? Do they really get to be the final arbiters of taste?

Oh, don’t give me shit, I’m just a constant warning to take the other direction, to think for yourself, like all my heroes from the past.
They’re not making anymore heroes. Just product. And that’s sad.

You’ve got the tools to do it your way. So don’t complain, take the road less-traveled, experiment, demonstrate your greatness. Your hands are not tied, dazzle us!

"By the early aughts, Reznor had grown frustrated with the way Nine Inch Nails records were being released and promoted by his label, Interscope Records. ‘The Internet has decimated their business, and they still don’t know how instant messaging works,’ he told me. He was also depressed by the pressure from the label’s head, Jimmy Iovine, to make his records more ‘urban.’ As Reznor saw it, ‘This is simply, How do we smooth off all the rough edges and make you just like what’s selling now?’ Iovine commissioned a number of hip-hop remixes of Nine Inch Nails songs, all of which Reznor rejected, and Reznor soon ended the relationship. ‘You know what, Jimmy? Fuck you. Take that beat and shove it up Timbaland’s ass.’"


Read about Trent and Chris Cornell and Jimmy here: