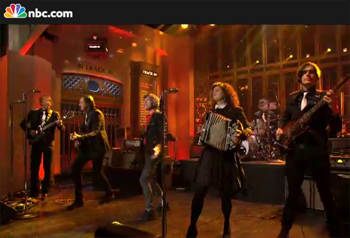 This was supposed to be bad. A tired rock star giving the middle finger to bandmates who can’t tour without him.

But from the very beginning of the show, Jagger exuded a charisma and confidence that was incredibly endearing, even in the skits. Instead of looking desperate, he took the whole show up a notch.
And then he performed with Arcade Fire.
Half the magic was the brilliant execution of the stinging guitar riff. But it was more than that, this was a band, not in the least bit self-conscious, thrilled to back up the best frontman in rock and roll. Who delivered.
What is it with Jagger… He can barely enunciate on the Super Bowl, the live shows are creepy, then he goes on the Grammys and tears it up and delivers here. Huh?
This was supposed to be a victory lap. Old man on old show, both past their prime. But it turned into a tour de force.
It wasn’t perfect.
Great rock and roll never is.
But it had undeniable energy, just like the original British Invasion. You just wanted to get closer, the music eclipsed the antics of the comedians, it was everything.
Jagger showed us how to do it.
But he couldn’t have done it without Arcade Fire.
And this performance would get a standing O on "Idol", because magic is undeniable.
It would have been criticized on "The Voice", but those phonies have no idea what’s real.
But Tyler does. Jagger inspired him to hit his peaks.
And tonight Mick reminded the rest of us that money can’t buy you love and there’s no joy like making (and listening!) to music.