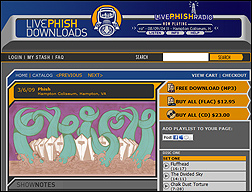 If Phish is giving away a free download of last night’s Hampton Coliseum show is the reign of the late twentieth century major label paradigm finally over?

That’s how it worked. The record company signed you, ripped you off and set you free to make some cash on the road, if the company had built enough demand for your services. It was all about the hit. You needed a specialist, with a team of soldiers to navigate the gauntlet to airplay and sales. You couldn’t do it yourself, the Grateful Dead proved that, giving up Grateful Dead Records and signing with Arista. It all came down to the label. We knew not only who Ahmet was, but Mo and Clive and Walter and Tommy, we were on a first name basis with these kingmakers. Who is running EMI today? Come on, who’s the kingmaker in the U.S?

And a star is not who he used to be. Not someone with bling featured on gossip Websites and possibly in printed news the next day. That’s a separate business from music. Just like those performers don’t truly perform live in concert. Those people are selling extravaganzas. Closer to Disney On Ice than the Doors. There’s been a split in the road, a bifurcation, are you a musician, pursuing your muse, or are you a fame whore?

Don’t tell me you don’t like Phish. That’s completely missing the point. A true star doesn’t play to everybody, he plays to those who care and who come to care. Phish has a rabid fanbase that paid $49.50 for tickets and much more flying to the gig in this somewhat remote location, because they had to be there! People won’t cross the road to go to the show of the Top Forty wonder, but they’ll load up their credit card to attend what they truly believe is an event.

And you’ve got to be in the building. That’s why the MP3s are free. Because they’re a shadow of the overall experience. In the heyday of the Beatles, it was all about the record, the band spent months recording "Sgt. Pepper" and never toured behind it. Now, a great band plays different material every night and if you weren’t at the show, you missed it. The record exists forever, the performance is evanescent.

It’s pretty exciting. We’ve come back to where we once belonged. Where it’s about musicianship, playing rather that the technical wizards behind the board.

And Phish’s fans believe the band can play. Rather than go on television shows, doing a promotional junket advertising their return, Phish practiced. Their audience demands excellence. That’s what Phish has to deliver to insure their return. Miley Cyrus or the Jonas Brothers have one big tour. A great act plays for the ages, it can’t afford to fuck up.

The old acts found it important to get the sound perfect. If there was a live album, it was rerecorded in the studio and came out months after the performance. It was supposedly impossible to do what Phish has done, play one night and make the music available for download immediately thereafter.

But really, how difficult is it? Is your house mixer really that poor, that he can’t get the sound right? Is your playing truly that bad, that you’ve got to cover up your mistakes? And what if you do make a mistake? It’s our flaws that make us lovable. And if you ever saw those models up close and personal you’d see loads of imperfections. That’s humanity, that’s what makes life intriguing, not the nose from this one, the removal of blemishes and Botox to make you look like a wax figurine. God, one can say that music is leading once again, it’s natural!

If you want to be part of the new music business, don’t start a record company, focus yourself on the live experience. If you want a hero, look to Don Strasburg, not some nitwit at the label. Hell, I can’t even think of a young nitwit at a label, the execs fired all the kids, who then went into tech. So there’s no innovation at the record companies. But that’s like saying there’s no innovation at the Smith Corona electric typewriter company. It’s irrelevant!

You need fans. Fans know who can play and who can’t. Fans want you to be three dimensional, exist outside the system and be about music more than money. Sure, scalpers resold Phish tickets for a ton more, but that doesn’t reflect negatively on Phish! And you should be worried more about your image than your pocketbook.

Phish has been doing it for two decades. The demand for tickets was created over a long career. They started in clubs, in college, they weren’t groomed for stardom by their parents, they didn’t make their debut on the Disney Channel before they hit puberty. That’s commerce, not music.

At the bottom of the page, click on: DOWNLOAD FREE MP3s of this show now at LivePhish.com

Register. You can use a fake name and password. Phish is not the police, they’re not harvesting e-mail addresses, if you don’t want to give them a real name, that’s cool, you at least want the music.

Then, after entering your information, hit: Login

Click: Download in the resulting window, pick where you want the file to go (on a Mac, best to navigate to the Users folder, double-click on this, find your name and then navigate to the Desktop) and prepare for your mind to be blown, as the whole show automatically downloads.

If you’re over forty, you might think this is complicated. But for Phish’s demo, this is de rigueur, they navigate online like this every day.

And then listen to some of the music. This was last night! Yours to keep, to play over and over again, to the point where you want to go to the show too.

I needed to hear the band’s take of "Loving Cup", a killer from "Exile On Main Street", an album with great reviews that most people don’t know. The vocals are imperfect, but wait until you get to the guitar solo, it bobs and weaves like none of the playing at a recent Stones show, the band is cooking, it’s positively alive!

And that’s what we’re looking for, not robotic repetition, but live, breathing humanity. This is the way out. Pay attention. Throw out what you know about downloading, piracy, pricing…that’s all history. It’s about music. Take a risk, not only in your playing, but how you reach your audience.