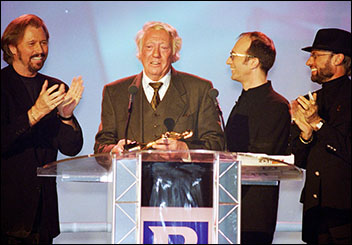 
But no one knew his name until "Saturday Night Fever."


You've got to understand, the only requirement to being in show business,
especially the music world, is the desire. It's a compendium of self-made
men, hustlers who fear neither veracity nor the law in their climb to the
top. Whatever you learn in school will not help you in the music
business, but what you learn on the street will pay dividends. Music is
all about relationships. Who you know is more important than where you
got your diploma, if you've got one at all. Illusion is more important
than reality, which is why you've got a hard time getting an accurate
accounting. They say it's a home run when it's a single and the person
who needs to get paid is the manager, the financial mastermind, the
rights holder, who reports to no one but himself, there's no SEC for the
record business.


And the truth is we all want to be hustled. We hope that things can get
better, that we can make it if we just believe, and these manipulators
prey upon us. And some of them become successful, like Robert Stigwood.
(Read "Born to Be Conned": http://nyti.ms/1HOJP1L)


He did not come from the Tommy Mottola school of self-promotion. At his
peak most knew little about him, his promo majordomo, the already
forgotten Al Coury, was the one who got the ink. This was back when
colorful characters realized it was best not to have the sun shine upon
them. A lesson today's ultra-rich should pay attention to. When you're
bending the rules, you don't want scrutiny. No one knew who Louis Bacon
was until the "New York Times" revealed his tax manipulation schemes on
its front page last week: "For the Wealthiest, a Private Tax System That Saves Them Billions": http://nyti.ms/1moh0zk
Then again, if you're boasting about cash you probably ain't got that much. And Robert Stigwood
had plenty.


He came from Australia to England with nothing. He made inroads before
the Beatles, but he latched on to them too. And then he hooked up with
Eric Clapton.


What would the music world be without Eric Clapton?


Jeff Beck never wanted the accolades, or was too prickly for those who
could boost his fortunes to pay attention to.


Jimmy Page broke through, but primarily as one thing and one thing only,
the driving force behind Led Zeppelin.


But it's the third guitarist in the Yardbirds who blazed trails, who
inspired a second generation of guitarists to wail. The Beatles got us
started, but it's Clapton who inspired us to aspire to greatness, to test
the limits. He was the first guitar hero, and he may be the last.


But no one in America knew who he was. Few had the Bluesbreakers LP. And
Cream's initial album "Fresh" had little traction, despite its stellar
track listing. It suffered in its production, credited to Stigwood
himself, who probably had little to do with it. But then Bud Prager
inserted his client Felix Pappalardi into the mix and the result was
"Disraeli Gears," which penetrated the consciousness of the cognoscenti
in the winter of '67-'68, but went nuclear when the anthemic "Sunshine Of
Your Love" hit the AM airwaves the following summer. FM was where you got
started, but no one had a receiver in their car, where tracks got blown
up. Kind of like the internet today. "Royals" was an internet smash, but
it didn't become ubiquitous until it got on the radio. But the difference
between "Sunshine Of Your Love" and "Royals" is the influence of the
former, it woke up players, it changed the culture, rock ruled.


And so did Cream.


Its subsequent album, "Wheels Of Fire," was a double. With extended takes
of "Spoonful" and "Toad" on sides three and four respectively. Suddenly,
hits didn't matter, it was all about the playing.


And the classic rock era was initiated.


Of course you've got to credit Hendrix, whose "Purple Haze" woke up the
populace. And, as stated above, without the Beatles there was no
beginning. But you cannot underestimate the influence of Cream.


What did Robert Stigwood have to do with it?


But I do know no major band has made it without a first-rate manager.
Whether it be David Geffen, Irving Azoff or David Krebs. They're each the
man behind the band, opening doors, parting the sea, making things
happen. Being able to play is just not enough.


And then Cream announced they were breaking up. Before the Beatles. And
there was a goodbye tour and a "Goodbye" album and Eric joined the first
supergroup, Blind Faith, subjugated his playing in Delaney & Bonnie and
then put out a solo album that sounded almost nothing like what had come
before. It's still my favorite, with "Easy Now" and "Let It Rain." But
then Derek united with Duane and the rest is history, ergo "Layla." But
"I Shot The Sheriff" came out under Stigwood's watch too, you think Bob
Marley would have been as big without Eric's imprimatur? Chris Blackwell
had been promoting him to no avail for years!


But the press focuses on the Bee Gees, because they had that moment with
"Saturday Night Fever," they helped usher disco into the mainstream. And
the movie and album were great, but what has Barry Gibb done for us
lately?


With hindsight, we can see Clapton is the giant.


But they were both handled by Robert Stigwood.


So another one is gone, another one bites the dust. That's the way of the
world, but the world used to be different. There was no corporate
promotion company, no Live Nation. And even branch distribution was a new
thing. Stigwood, et al, were making it up as they went along. And what
resulted was the modern music business. You can't get paid? Neither could
the bands of yore! They weren't in it for the money, but the adventure
and the girls, it was a lark. But Stigwood and his buddies turned it into
a cash machine, and eventually mazuma rained down upon the acts, who are
ungrateful to this day, the men behind the machine rarely get their due.


But they do get paid.


If you last long enough, you get a better record deal, you graduate to
the best management. But you still need players on your team, you can't
do it all yourself. Just ask Trent Reznor, who went indie and then
crawled back to a major label.


But it was easier back then, because no one knew anything, there were few
music business attorneys and the hoi polloi had no access to Don
Passman's book. You had to take it on faith, that this person unveiling
this yarn could truly make you a star.


And that's why those who were there remember him.