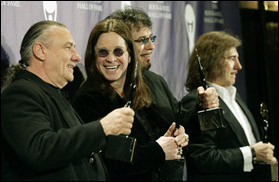 LOS ANGELES (VIP-NEWS) — Los Angeles' tiny Whisky A-Go-Go was packed on Friday Nov. 11th with music press, industry executives and hardcore fans for the long anticipated announcement that the original members of legendary hard rock band Black Sabbath would reunite for the first time in 33 years for a new studio album and a massive worldwide tour.

Black Sabbath — including singer Ozzy Osbourne, guitarist Tony Iommi, bassist Geezer Butler and drummer Bill Ward — made the announcement during a press conference at the Whisky, where the group played its first show in the city exactly 41 years ago on Nov. 11. Black Sabbath will headline the Download Festival, which will take place June 8-10 in Donington Park, England. Meanwhile, Rick Rubin will produce the group's comeback album, which is expected to be released in fall 2012 through Vertigo/Universal.

The enthusiastic Henry Rollins hosted the press conference, sharing his love for Black Sabbath and some fond memories of the first time he listened to the band as a teenager. "I don't know how it was for you," Rollins told the audience, "but I was a very aliented young person. And when I heard Black Sabbath I realized my life had a soundtrack."

Rollins says he first listened to Black Sabbath in the back of a school bus at age 14 or 15. "Someone had a cassette copy of the 'Paranoid' album," he said. "I heard Ozzy Osbourne and I heard these riffs that were room clearing. And I realized there were some people out there using music to make great statements."

Following Rollins' 10-minute introduction, the members of Black Sabbath came on stage to answer some questions from the audience. Rollins got the ball rolling by asking the group why they felt the need to reunite for a new album and tour. "The time was right," Osbourne mumbled. Iommi added, "It was now or never for us. We're getting on great; everything is really good. And we have some great music to play."

Rumors of new Sabbath activity have been swirling for months, with Osbourne recently telling Billboard.biz that new material was "a very, very strong possibility. It's in the very early stages, so we haven't recorded anything yet."

Iommi, who wrote extensively about the band in his new book "Iron Man: My Journey Through Heaven & Hell With Black Sabbath," also told Billboard.biz that he regrouped with Osbourne, Butler and Ward at Osbourne's California home earlier this year to play some music "for a bit of fun, and to see if we could all play. It was good, but it was just purely, 'Let's have a go and see what happens.' "

Rubin, who joined the band members on stage during the conference, said that Black Sabbath is halfway through the writing process and hope to begin recording the new album early next year. "I've stood in the room with them when they played and it sounds remarkelbly like Black Sabbath," the producer said. "As long as it sounds like that I think we're on the right track."

Osbourne said choosing Rubin as the produce was an "obvious choice," while Iommi joked, "he kept hounding us every five minutes — we couldn't stop him."

Since the original lineup came together in 1968, the English metal pioneers have scored album sales of 15 million, according to the RIAA. Between 1970 and 2007, Black Sabbath have had 22 entries on the Billboard 200, and their biggest-selling effort — 1970's "Paranoid," which featured classic rock tracks like "Iron Man" and "War Pigs" — has sold 1.6 million in the SoundScan era.

The lineup of Osbourne, Iommi, Butler and Ward released its last album, "Never Say Die," in 1978; the disc has sold 133,000 copies in the SoundScan era. Osbourne split with Black Sabbath in 1979 and went on to a hugely successful solo career, with hits like "Crazy Train," "Mr. Crowley" and "Shot in the Dark." He rejoined the band in 1997 and toured on-and-off with them through 2006, but the only new material produced was two songs tacked onto a 1998 live album.