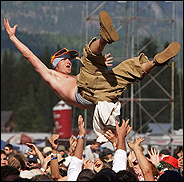 PEMBERTON, BC (CelebrityAccess MediaWire) — The Village of Pemberton is looking to revisit their agreement with the province of British Columbia in a way that might open the door for a new promoter at for the Pemberton Music Festival.

The mayor of Pemberton revealed last week that the village and the land owner of the Pemberton festival site had requested that the provincial Agricultural Land Commission (ALC) amend the memorandum of understanding which governs the use of the festival site to allow other promoters besides Live Nation to stage the event.

While the ACL rejected the request, they commission did state that they would be open to a "request from the community" and not from the land's owner.

Live Nation first staged the festival in Pemberton in 2008, bringing more than 40,000 people to the area and infusing more than $5 million into local businesses. Since then, the promoter giant has held off on a return for the event until they can find a way for it to be financially feasible for them.

Despite the effort to open the event up to other promoters, Pemberton Mayor Jordan Sturdy was reluctant to discuss if the festival would return for 2011.