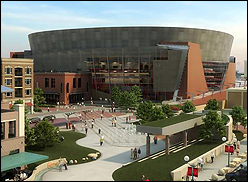 LINCOLN, NE (CelebrityAccess) — A recent study by a venue consultant reveals that the SMG-managed Pinnacle Bank Arena is on solid financial ground.

As a result of the findings of the study, the West Haymarket Joint Public Agency, which was created to handle debt payments for the arena, will return a portion of the generated revenue to the arena.

Total revenues at the Pinnacle Bank Arena were $6.8 million dollars in 2014, and the JPA initially collects about 50 percent of those dollars. A portion of that income is used for debt service, and to pay the costs of the JPA, with the rest being returned to the Arena to help cover its $5 million in operational expenses.

However, Lincoln Mayor Chris Beutler was quick to note that the returned revenue was not a subsidy.

“The JPA structure has been very successful ensuring that debt payment finances are in great shape and taxpayers are protected,” Beutler said in a press statement. “We always anticipated we would return a portion of the Arena revenue back to operations, and this return – called the ‘operational increment’ – was built into the original JPA structure.”

“Pinnacle Bank Arena is performing as well as or better than the comparable arenas in terms of presenting great events and generating revenue,” said Mike Wooley of VSG. “The management and staff take pride in the beautiful building, and it is being very well maintained, an important factor in extending the life of the facility.” – Staff Writers