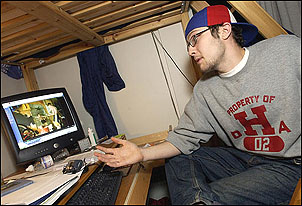 The focal point of home entertainment is changing as the computer edges out traditional consumer electronic devices in overall importance, according to the results of a new survey conducted by Harris Interactive Inc. for Microsoft Corp. The survey, which polled more than 2,000 computer users ages 13 years and older, revealed that the computer is redefining how people entertain themselves in the home. Almost half of those surveyed said their computer is more important than their television (43 percent), while nearly two-thirds said their computer outranks their CD player (63 percent), stereo (61 percent) or DVD player (59 percent).</P?

"We were blown away with the number of people who are using the computer as their center of entertainment," said Hal Quinley, group president at Harris Interactive. "These results indicate people look to their computer as a TV, DVD player, stereo and CD player combined. The increased simplicity in using the computer to acquire, edit, organize and enjoy music, movies and photos is clearly driving this hot trend in 2003."

As its role in home entertainment expands, the computer is moving out of the home office and into more-social rooms of the house, according to respondents. More than half of those polled (63 percent) use a computer in the living room, family room, den, dining room, kitchen, media room or other group space in the home, including 28 percent who use a computer in the living room specifically.

People are also becoming more confident about creating and enjoying their own entertainment content on the computer, the survey shows. For example, 44 percent of respondents said they consider themselves either "very" or "extremely" knowledgeable about burning CDs, and 48 percent said the next computer they buy absolutely must have a DVD burner. More than half (57 percent) said the ability to edit personal photographs is important to them.

Consumers' increased confidence in digital media also has resulted in growing interest in new ways to use the computer to enjoy entertainment. Sixty-nine percent of respondents said they are interested in having access to their digital music collection from anywhere in their home, as well as access to videos (51 percent) and photographs (51 percent). Sixty percent are interested in accessing entertainment on their computer without using a mouse or keyboard.

"Entertainment on the computer is more accessible than it's ever been before," said Kevin Eagan, general manager for the Windows eHome Division at Microsoft Corp. "People are discovering how easy it is to use their home computer to record their favorite TV shows, listen to music, or share digital photos and videos with family and friends. Innovations like the Media Center PC have offered an easy-to-use, fun and convenient way to enjoy digital entertainment using the computer, and consumers are responding with interest and excitement."