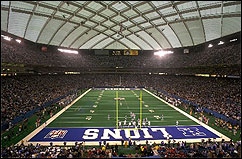 PONTIAC, MI (CelebrityAccess MediaWire) — After selling at auction las year for a paltry $583,000, the Pontiac Silverdome is set to re-open under new management on April 17th as a major events venue with a monster truck extravaganza.

The Silverdome's new owner Andreas Apostolopoulos, a Toronto-based commercial real estate entrepreneur, has said that he plans to invest millions to rehabilitate the venue.

"We're gonna spend a lot of money here, create a lot of jobs, meet a lot of new people. It's not for sale, and it's never gonna be for sale," Apostolopoulos told the Detroit Free Press.

Other events planned for the Dome include the Green Soccer Bowl from May 20-23, featuring soccer teams from around the world. The new ownership of the Dome is also interested in reviving the property as a major concert venue.

"If you sold out the Silverdome, you had nothing to prove," Tom Constand, a spokesman for the Silverdome told the Daily Telegraph. "We're bringing back that rite of passage."

The Dome, which originally opened in 1973 with a price tag of $55.7 million, has served as a home to the Detroit Lions (NFL), the Detroit Pistons (NBA) and a number of other teams, but has been largely dormant since the Lions left in 2002. The dome's former owners, the cash-strapped City of Pontiac, made several unsuccessful attempts to sell the dome to escape from the annual $1.5-million upkeep cost but the effort was unsuccessful until 2009 when the city's emergency financial manager put the dome up for an auction with no minimum bid.

Ticketing for events at the Silverdome will be handled in-house through the venues' box office or their website. Constand said that the decision to use in-house ticketing was done in order to keep tickets as affordable as possible. – CelebrityAccess Staff Writers